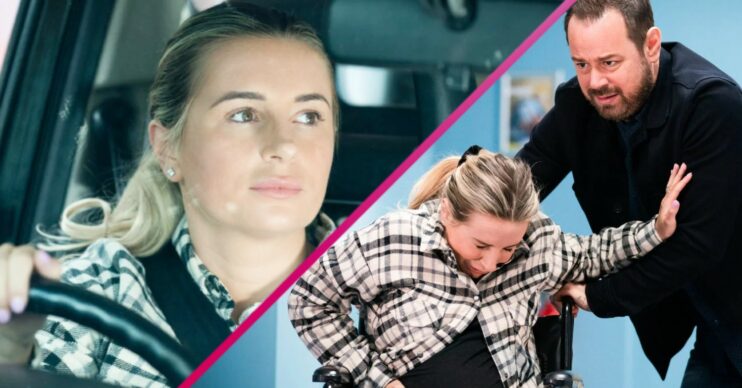 The reality star will appear alongside her famous dad!

Dani Dyer is set to make her explosive EastEnders cameo alongside her dad Danny later this week.

The former Love Island star, 24, will appear as cab driver Jeanette on the BBC One soap.

It comes weeks after the show teased her debut soap appearance with Danny, 43, who is best known for playing Mick Carter.

During the episode, Jeanette picks up Mick while on his way to wife Linda’s baby scan.

Mick is already running late after getting tied up in a chat with their daughter Nancy.

In a desperate bid to help out Jeanette, the landlord takes the wheel and quickly drives them both to the hospital.

In the first pictures released by the BBC, Mick is seen in a panic as he stops Jeanette’s cab.

Meanwhile, in a second photo, the pair are seen in the hospital.

Dani’s character appears in agony after suddenly going into labour.

She is seen holding her bump in another shot, as Mick attempts to calm her down.

What has Dani acted in?

Whilst Dani is well-known for her Love Island appearance, she is also an actress.

In 2019, Dani appeared in short film Watch What I Do alongside Mia McKenna-Bruce, who played Penny Branning in EastEnders.

Danny and Dani also host a podcast together called Sorted with the Dyers.

However, her upcoming soap debut appeared to divide fans.

Speaking on a Digital Spy forum, one excited fan said: “This is actually good news. Why just a cabbie though?”

A second wrote: “I have no issue with it. She’s also a decent actress.”

Meanwhile, others weren’t some aren’t keen on the idea of Dani appearing in the show.

Another added: “Another reason not to watch. Abysmal news.”