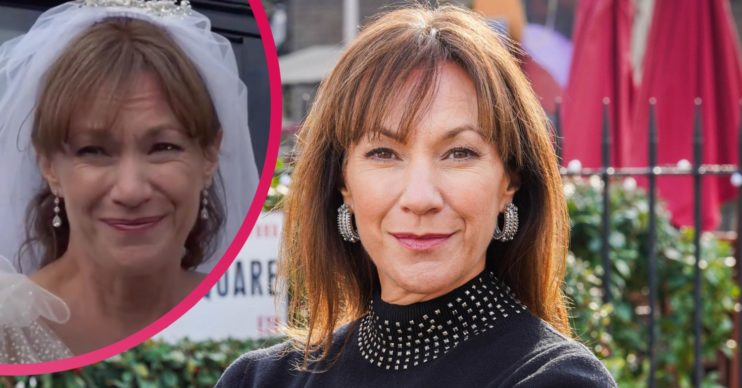 The former junkie and ex-prostitute has got a lot of history with people in Albert Square!

Rainie Highway in EastEnders has been popping up in some of the Square’s most dramatic storylines, including Phil’s crack addiction and the ‘who killed Lucy Beale’ mystery, for years.

Since 2018, she’s been a fixture in Walford and has settled down with Stuart Highway.

Rainie was born Rainie Cross. She’s the daughter of Cora Cross, and sister to Tanya Branning and Ava Hartman.

She was (briefly!) married to her former brother-in-law, Max Branning.

Rainie’s got no children of her own, but she’s an aunt to Lauren, Oscar and the late Abi Branning, as well as to Ava’s son, Dexter. She’s also the legal guardian of her great-niece, also called Abi.

Who plays Rainie Highway in EastEnders?

Rainie is played by experienced actress Tanya Franks. She played Karen Ellis in Family Affairs, and DI Rowanne Morrell in The Bill, as well as starring with Sharon Horgan in Pulling.

She’s also made appearances in Ashes to Ashes, Pramface, Mum, Broadchurch, Chewing Gum and Inside No 9, as well as treading the boards in the theatre in many plays.

And she also runs her own production company called Stock-pot Productions. We don’t know how she finds the time!

And as if that’s not enough to keep her busy, Tanya is a dedicated runner. She took part in the London Marathon in 2019, raising money for a dementia charity inspired by her former co-star Barbara Windsor.

Back in the day, Rainie always brought trouble with her to the Square. She was an alcoholic and a drug addict and she had a real self-destructive streak.

She introduced Phil to crack cocaine in a very controversial storyline, though Phil later helped her kick the drugs and drink again.

Rainie blamed her addictions on her relationship with her mother, Cora, and her sister, Tanya, though the women worked hard to repair their friendships.

She often turned to prostitution to fund her habits. After Lucy Beale was murdered, Ian Beale received mysterious messages from someone in his phone as ‘R’.  It was later revealed that he’d been with Rainie on the night Lucy died.

Rainie blackmailed Ian about their liaison and even dragged Mick Carter into the murky business when he followed Ian and was shocked to find himself arrested for soliciting.

When Abi Branning died, Max and Rainie cooked up a scheme to get custody of her baby daughter. They got married and pretended to be a couple, promising to give little Abi a stable home.

But Rainie’s mother, Cora, also wanted the tot and gave Rainie £50,000 to stop the fight. Rainie took the money but revealed the bribe to the social workers.

Even though Rainie had developed feelings for Max, he didn’t feel the same way – at first – and she turned to his brother Jack for comfort. But though Max and Rainie did make a go of it for a while, their romance fizzled out when he went abroad.

Stuart and Rainie Highway in EastEnders

It’s a match made in heaven! Rainie and Stuart met at an AA meeting and quickly fell in love.

Their romance seemed to put both of them on an even keel and despite some hiccups along the way, including a fairly unconventional wedding day, they’re happily settled down, looking after little Abi, and running the funeral parlour.

Now the couple want a baby of their own but they know a surrogate is their only option.

Bernie Taylor has offered to be their surrogate, but is she doing this for the right reason? And will this next chapter in Rainie’s eventful story end in disaster?

Want more from EastEnders? Entertainment Daily has a dedicated EastEnders spoilers section for you to get your fix before the latest episodes air.