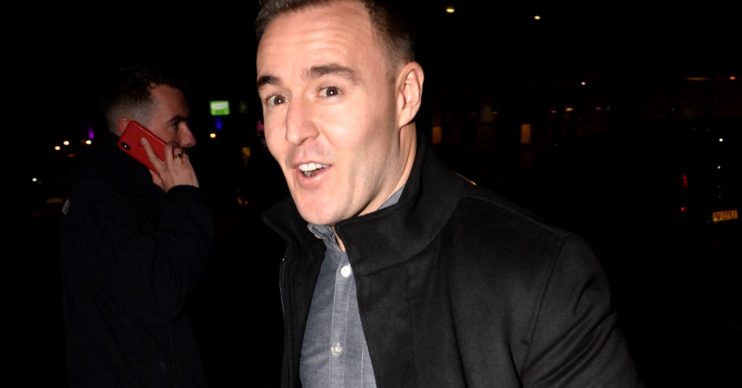 The actor took the funny comparison in good spirits

Coronations Street’s Alan Halsall was trolled by friends who spotted one of his knees looks like horror doll ‘Chucky’ from the Child’s Play horror films.

The actor and his former co-star girlfriend Tisha Merry, 26, posed outside their stunning home wearing Peaky Blinder and burlesque themed fancy dress when the spooky comparison was made.

The couple looked gorgeous in their outfits but the same snap posted on Alan’s Instagram stories labelled ‘reality’ revealed Alan was in shorts showcasing his scary knee, while Steph didn’t have any shoes on.

Mates rushed to tell Alan, 37, that his knee looked like the horror doll inhibited by the spirit of a serial killer with a source adding: “As soon as you spot it, you can see Chucky!”.

Alan and Tisha were dressed up for a quiz night at the palatial home they share together, with fans gushing at how lovely their fancy house is.

As well as raving about the couple’s beautiful home, fans also thought Alan and Tisha looked lovely too.

One commented: “Looking good the two of you” while another added: “Fab, making the best of it. You two look great.”

Alan and Tisha recently celebrated their one-year anniversary by cooking a special meal at home.

Loved-up Alan posted a sweet picture of the pair, writing:

“Happy anniversary @missdrewmerry93 I love you.”

Later on the couple got dressed up as if they were off out on a date night and posed in their front room with glasses of champagne, with Alan revealing that although it wasn’t the anniversary they thought it would be, it “was a lot of fun getting dressed up to sit at our own dining table”, adding: “Great company makes a great night.”

“ All dressed up with nowhere to go” . Not really how I imagined spending our first anniversary, but it was lots of fun getting dressed up to sit at our own dining table 🥂 it didn’t matter one bit ….Great company makes a great night @missdrewmerry93 xxxx

Got everything I need to self quarantine 💖💛

Alan has been busy home-schooling the little girl and even made her a fake McDonald’s complete with nuggets, chips and a toy.