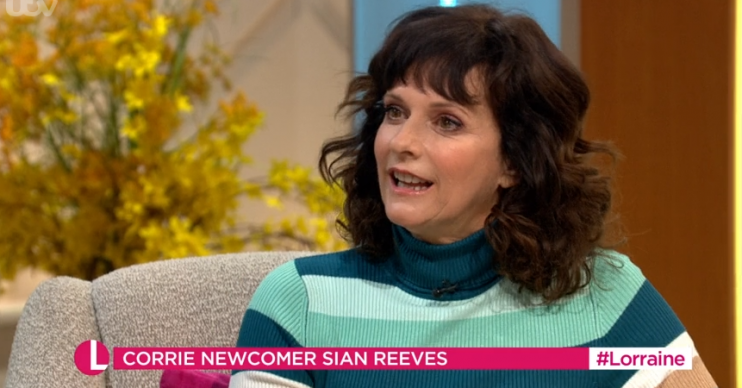 Sian has also had a part in Emmerdale

Sian Reeves, who is currently in Coronation Street, has revealed she would love to join the soap for longer.

Sian has joined the cobbles as Tim Metcalfe’s secret wife Charlie Wood, but it looks like she will be departing at some point because the actress had committed to a play, By The Waters Of Liverpool.

However, she would love to return for another stint.

Quizzed on whether we would see her on Corrie for “a bit longer”, she said: “I couldn’t possibly say, but yes it would be really nice, I have had such a nice time there, but I was committed to By The Waters Of Liverpool.”

Sian has called for viewers to “tweet in” to Corrie bosses if they would like to see her back on the cobbles.

During an interview on Lorraine, Corrie fan and the show’s host Lorraine Kelly admitted she would love to see Sian return to Weatherfield, and the former Mount Pleasant star replied: “Oh thank you Lorraine, did you hear that? Tweet in.”

The show newcomer also revealed she asked to be taken on a tour of the Rovers Return before filming there, to make sure she wouldn’t cry when the cameras started rolling.

The 53-year-old actress says she “settled in” on the ITV soap, but she had a tour of the legendary boozer before shooting a segment there because she was worried about breaking down in tears because of all the history attached to the fictional pub.

She said: “It’s [Corrie is] a great place to be, everybody is very nice. I know Alison King from Cutting It… and the costume department, the make-up department.

“It was quite nostalgic going there having watched it since I was little.

“I got Paul, my friend, one of the dressers, to take me into the Rovers before I started shooting there. So I wouldn’t cry, because I felt really wound up.

“Sally Ann [Matthews] was so kind with tips on how to pull a pint.”

Sian recently revealed she was nearly cast as Gina Seddon in Coronation Street, before landing the part of Charlie.

Revealing how the role came about, Sian said: “I’ve been flirting with Coronation Street for a quite a while, actually.

“I’ve always wanted to be in it. I got down to the final screen test to play Gina, Sally’s sister, and Sally [Dynevor] and Michael [Le Vell] were so lovely that when this part came up I was thrilled.

“The character of Charlie Wood has ticked every box for me and I still get to work with Sally.”