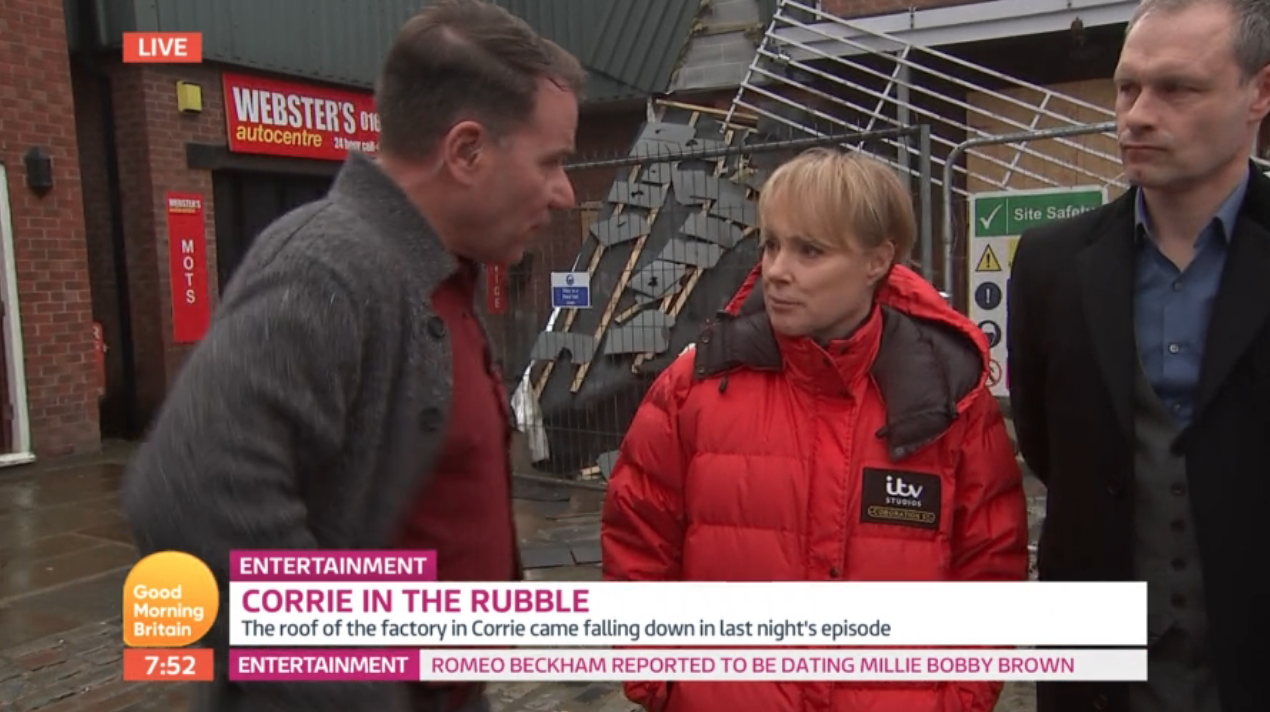 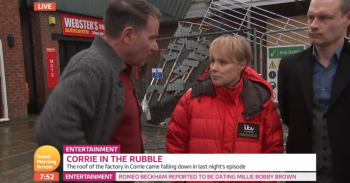 TV correspondent was a bit cheeky!

But he opened the item by having a jokey pop at the terrifying fall suffered by Sally at the climax of last night’s episode which saw her plunge through Underworld’s ceiling as she argued with sister Gina over their protest banners.

The 49-year-old reporter cheekily quipped: “You were the one who took the plunge.

Read more: Gareth Malone had to see a therapist while making Grenfell Tower programme The Choir

“You’re quite light on your feet – I had no idea you were carrying so much Christmas weight!

Although Sally – and Ben – were shown to be listening intently as Richard made the silly remark, they soon cracked up into uproarious laughter.

However, it was not Richard’s jibe that drew the ire of fans watching at home.

Viewers were more concerned that the line up of soap stars was effectively a spoiler on who would survive the disaster.

Some commenters felt interviewing Sally gave more than a hint that she would not be killed off by her dramatic fall.

A couple of others watching at home, meanwhile, felt the segment failed to live up to advance billing.

Another added: “Love @coronationstreet, it is getting exciting again but don’t want anyone killed off, it is a nice group.”

An angrier observer on Twitter fumed: “Thanks GMB for ruining Corrie. Having Sally standing on the cobbles this am talking to Richard clearly still filming kind of makes it obvious she hasn’t died, given that story filmed months in advance.”

And in regards to the expected preview of the storyline’s development in upcoming, one person complained: “Watched your report at 7.50 this morning and was waiting excitedly for the seek preview of Wednesday’s episode, but was left disappointed when the “sneak peek” was from the week before.”

Another fan pondered: “@GMB @RichardAArnold confused about your @itvcorrie preview as that was actually last night’s episode! Deprived of spoilers! #CoronationStreet.”

Check out the contenders for who could be responsible for the devastating roof collapse here.