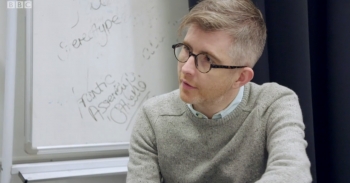 Choirmaster Gareth Malone underwent therapy to help him deal with the emotion of working with school pupils affected by the Grenfell Tower fire.

The 43-year-old told Event magazine he was “really glad” he spoke to a psychotherapist on a weekly basis during filming for The Choir: Our School by the Tower so he could focus on the kids taking part.

Students from Kensington Aldridge Academy, located next to the tower block, had to take lessons elsewhere on a temporary site for over a year after the June 2017 disaster that claimed 72 lives.

Gareth, known for his TV work with the Military Wives, was tasked with creating a special concert to mark the school’s return to the original building – and he decided to get involved after watching the tragedy unfold on his television screen.

He told the mag: “I woke up and saw what was happening on the news. I was very affected. I saw people from the local community and felt their bubbling anger.”

Gareth worked with the pupils of the west London school every week for seven months before the original buildings were reopened.

When they did, he then spent nine weeks working with the students on the project as they wrote and performed a musical tribute to the school’s history – and future.

The London-born broadcaster reflected on his own therapy as a way to ensure the pupils’ aims were prioritised.

Gareth said during his interview with Event that he sought out assistance “so that I could get my own reaction to it out of the way and just be an open space for the kids to talk”.

He also noted how one particular teen who has lived with 11 different foster families left him moved.

In last night’s concluding episode of the two-part BBC series Gareth singled out 14-year-old Adil as a student he believes had big potential – but one who also nearly dropped out of the choir after difficulties with his foster placement.

Considering what Adil has had to endure, Gareth said: “Those are big things he’s dealt with, and it is very affecting. I wanted to be the guy who is able to sit there and say: ‘Well, tell me about that…’ I can’t bring my own sobbing in the face of what’s happened to these kids. That’s not useful to them at all.”

Many viewers were left teary-eyed by Gareth’s efforts – and proud of Adil for stepping up to be front and centre of the choir’s performance.

“I’m trying to get through #TheChoir but the story on Adil is making me so emotional. I am really rooting for him,” tweeted one.

“Lump in my throat from watching #thechoir impossible to watch without tears, what an amazing job those wonderful kids did. Goosebumps,” said another viewer.

“What a really strong and fantastic person Adil is (oh and hugely talented). #thechoir  Superb school with great staff as well,” added a third person watching at home.

A fourth tweeted: “Caught up with #TheChoir. Tears are flowing, from both of us. What an absolutely beautiful thing.”

A fifth concluded: “I’m so proud of Adil. And Adil should be so proud too. It just goes to show what a little bit of belief and encouragement can do. Wish I’d had a teacher like Gareth Malone.”