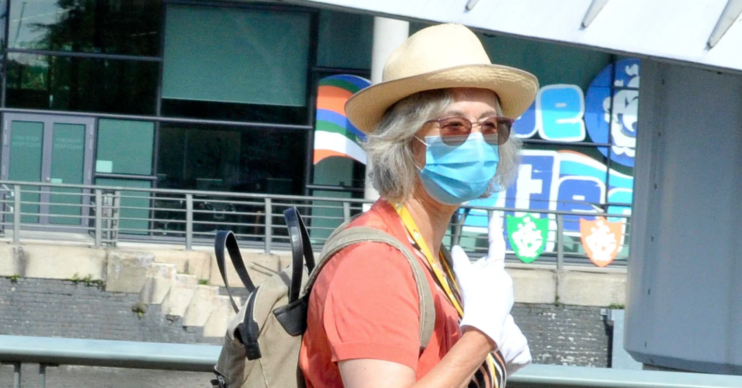 The actress is back filming at the Manchester studios

Coronation Street star Maureen Lipman has confirmed her return as she headed to the set for the first time since the lift of lockdown restrictions.

The 74-year-old actress – who is known for playing Evelyn Plummer on the ITV soap – seemingly confirmed her return after pictured leaving the Manchester studios today (August 24).

The star was previously unable to return to work following lockdown.

However, now the social distancing rules are firmly in place, the star has since been allowed back on set.

Ahead of her soap comeback, Maureen headed to the set in a protective face mask and gloves.

The actress previously revealed she had been given a timeframe for her comeback during an appearance on Good Morning Britain.

Speaking to Lorraine Kelly, she said: “There is an element now of people, particularly in my business.

“You used to be able to waitress when you weren’t working but now there’s nowhere to waitress. So it is tough.

“I’m very aware that I’m incredibly lucky to have Coronation Street to look forward to in September when the wrinklies get unrolled.”

Back in May, Maureen admitted she may have spread coronavirus around the soap.

She suspected she might have suffered from “a mild form” of COVID-19 while filming was still underway on the cobbles.

Speaking to The Lady magazine, she said: “I believe myself to have had a mild form of coronavirus masquerading as a fortnight’s persistent cough, with attached fatigue and sweats.