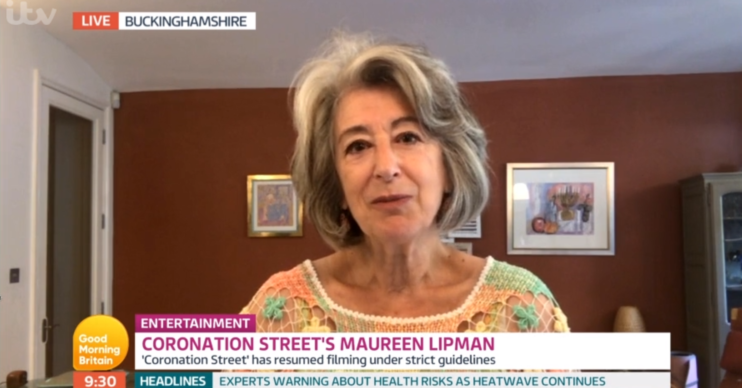 Maureen is still unable to film at the ITV soap

The 74-year-old actress, who plays Evelyn Plummer on the ITV soap, isn’t re-joining her younger cast mates on the cobbles just yet.

Production got back underway earlier this month amid the coronavirus pandemic, but she has a timeframe for her comeback.

Speaking to Lorraine Kelly on Good Morning Britain, she said: “There is an element now of people, particularly in my business… you used to be able to waitress when you weren’t working but now there’s nowhere to waitress.

How will Coronation Street explain absences of older cast members?

Corrie resumed filming this month after a three-month break due to the UK’s lockdown restrictions.

Executive producer Iain MacLeod recently opened up about a number of plans to work around issues preventing some of the older actors from returning to set. These actors include longest-serving Corrie cast member Bill Roache.

I’m very aware that I’m incredibly lucky to have Coronation Street to look forward to in September.

He said: “In some cases we’ll be telling a story that accounts for them being off screen for the time being. But in other cases we’ll imagine that they’re just upstairs unseen.

“So it’s not like we’ll have to explain that they’ve gone away somewhere. It’s purely that they’re self-isolating. It has provided us with some opportunities to do some interesting stories as well.

“We have considered having some of the older cast, vulnerable cast, on Zoom calls or Skype calls or Facetiming and other ways of storytelling that incorporate that as a device.”

Iain explained how bosses are keen to “keep sight” of certain actors and their characters. Even if they can’t physically be on the cobbles set due to certain health and safety restrictions.

He added: “In some cases they physically can’t be in the building.

“But I still think we want to keep sight of them and I know the audience will thank us for keeping them in sight. They’re very well loved, they’re fantastic characters and performers.

“So we are trying to take advantage of the post-pandemic world and some elements of that that have become fairly normal for a lot of us.”

However older cast members aren’t the only ones who can’t return to filming.

This Morning soap correspondent Sharon Marshall also confirmed that child actors will be absent from Corrie and Emmerdale.

This is due to them needing chaperones. With the social distancing guidelines, they need to keep as few people on set as possible.

It has not been confirmed when children will return to filming.

Have you been able to return to work?