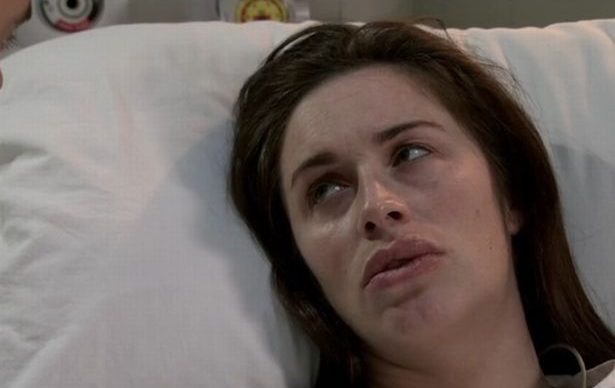 Viewers said they had 'trebled in size'

Julia Goulding has been forced to responds to claims she’s had lip fillers, after Coronation Street viewers accused the actress of ‘trebling their size’.

Julia, who plays Shona Ramsey, is currently on maternity leave after having her first child – but returned to social media last night to deny she’s had work done.

On Wednesday (January 15), Julia’s character Shona woke from the coma she’s been in since being shot in the terrifying gun siege over Christmas.

David was thrilled to see his wife open her eyes, but devastated just seconds later when she failed to recognise him.

Doctors told him she might not have her full memory for a whole year and that she’ll be moved to a specialist rehabilitation hospital in Leeds – which conveniently writes the character out of the ITV soap while Julia enjoys her maternity leave.

Viewers, however, thought they’d noticed a big change in the character whilst she’d been in a coma – her lips had got bigger!

One tweeted: “Has Shona had her lips done especially for her hospital bed scenes? #Corrie.”

Another said: “Shona looking like Pete Burns with those lips! #Corrie #YouSpinMeRightRoundBaby.”

Shona looking like Pete Burns with those lips! #Corrie #YouSpinMeRightRoundBaby

Has Shona had her lips done especially for her hospital bed scenes? #corrie @itvcorrie

Looks like Shona has been in for a lip job. #corrie

Shona looked like a ducks arse then,with them lips😝 #Corrie

When did Shona have time to get her lips done, while she was in a coma? #Corrie

Has Shona had her lips done? #corrie

A third added: “What the [bleep] has happened to Shona‘s lips? They’ve trebled in size, they look huge! #Corrie.”

“When did Shona have time to get her lips done, while she was in a coma?” asked one more.

Actress Julia, 34, joined social media herself to address the comments and deny having anything done to her lips!

She tweeted: “For those of you wondering about Shona’s (my) lips, I’ve NOT had lip fillers done or cosmetic enhancements. I did, however, have a giant cold sore when filming these scenes!”

For those of you wondering about Shona’s (my) lips, I’ve NOT had lip fillers done or cosmetic enhancements, I did however have a giant cold sore when filming these scenes! 😂😬 pic.twitter.com/GJYI7wa1m4

Her friends and followers were quick to comment on her revelation, with actress Kate Robbins – who recently starred in EastEnders – replying: “I did wonder! Made it all the more realistic… Brilliant eps tonight.”

Another said: “You don’t need to explain. Glad Shona is alive though.”

A third added: “Awww we knew it was a cold sore, it was only one side… Still as gorgeous as ever @juliagoulding… You must feel like laughing when David and Gail have their moments around the bed. Great actress.”

Julia announced the birth of her first child with husband Ben Silver in December, weeks after going on maternity leave.

Thank you to the lovely couple in the park who took this picture for us: Taken as I was in early labour on my due date. The next day Ben and I welcomed our baby son into the world. Franklin Wolf Silver born on 30/11/19. He’s changed our lives for the better in every way. I feel like I’ve known him my whole life. ❤️

Julia announced she was pregnant back in May and Corrie actress Jane Danson, who plays Leanne Battersby, confirmed her co-star was on maternity leave in November.