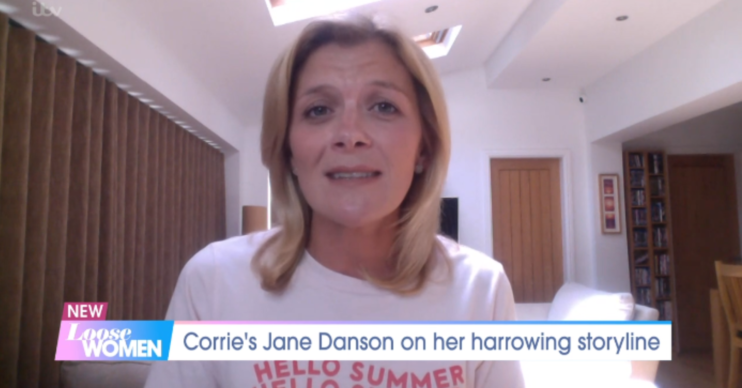 Jane, who plays Leanne Battersby in the ITV soap, appeared on Loose Women today (Wednesday, May 27) to talk about her current storyline, which sees Leanne’s son Oliver being diagnosed with mitochondrial disease.

However in the interview, they moved on to talking about Jane’s children Harry and Sam.

When asked how she was getting on with homeschooling her boys, she said, “Awful” before bursting into laughter.

She continued: “It’s really difficult because I’ve got one child at high school, who just kind of gets on with it and he’s had very much a lot of his work sort of submitted online, he can do that online and send it straight off.

“My youngest is in year six so he’s just about finishing off really. So I think he’s found it more difficult because you know he was just about to do his SATs and then it would’ve been all the fun stuff, the leavers production, the leavers assembly, so they may miss out on all that which is really unfortunate.

“So yeah, it doesn’t feel like there’s been a huge amount of motivation for the year sixes because they were kind of almost done so it’s been kind of hard in places but he’s done as much as he can.”

Currently there is no set date for Coronation Street to resume filming. However earlier this month, ITV revealed in a statement they’re in the final stages of planning the return.

Meanwhile, the BBC revealed EastEnders will return to filming at the end of June.

How have you been finding homeschooling your children? Leave us a comment on our Facebook page @EntertainmentDailyFix and let us know what you think of this story.