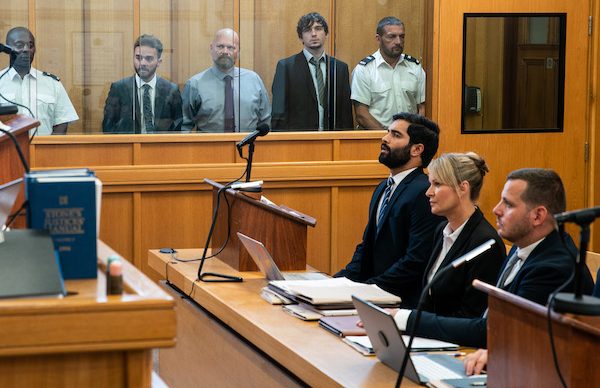 His prison nightmare has only just begun

Next week’s Coronation Street sees David Platt back in court after Josh Tucker frames him for attempted murder.

After rapist Josh was attacked in the prison riots, David has found the blame pinned on him as the evidence stacks up, and it seems even Imran is starting to worry that David is facing a seriously long stint in jail thanks to Josh.

As the police question David next week about Josh’s attack, the hairdresser realises just how bad it looks when he is shown the video that clearly puts him at the scene of the crime.

He maintains his innocence, but it is clear that no one believes anything he has to say… and eventually it is left up to Shona to beg Nick to bury the hatchet with his brother to help David.

To make matters worse,  Shona has also had a phone call from the wedding venue telling them, the final instalment of the money is due that day.

But with no guarantee that David will be out of prison in time for them to tie the knot, Shona is left with a difficult decision on her hands.

As David prepares for his court hearing, fellow prisoner Abe corners David and tells him that he’d better stick to his story or he will find himself in hospital like Josh.

With Abe’s words of warning ringing in his ears, David pleads not guilty to the attempted murder of Josh, while Tez and Abe also do the same.

But Gail, Sarah, Nick and Shona are all left reeling when David is refused bail and it is announced that he will be remanded in custody until the trial.

However things seem to be looking up for David when Imran calls in at the Platts’ house and tell them that Josh has regained consciousness.

Everyone is thrilled, hoping that Josh will do the right thing and tell the police that David actually tried to save his life. But are they right to pin all their hopes on someone as unhinged as Josh?

The following day Shona’s hopes of ever getting David home to get married are left in tatters when Imran tells her that Josh has lied to the police and framed David for trying to kill him.

With his world falling apart around him, desperate David attempts to talk to Abe and Tez and persuade them to come clean about what really happened to Josh.

But of course his pleas fall on deaf ears and David realises that he’s in more trouble than ever when the pair tell him that if he goes to the governor with the truth, then Max and Lily will be the ones to pay the price.

Can David prove his innocence before he’s locked up for the foreseeable?

Do you think David will be able to prove his innocence? Leave us a comment on our Facebook page @EntertainmentDailyFix and let us know what you think!