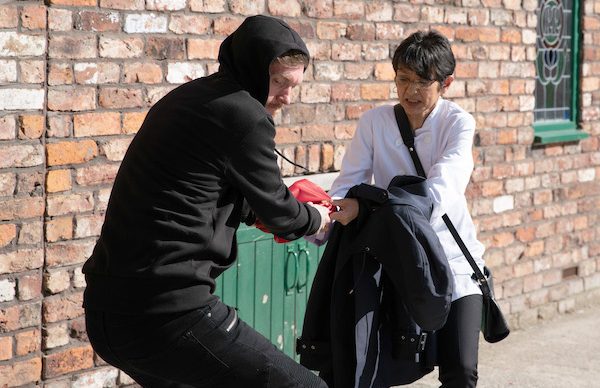 There’s drama heading for Coronation Street next week when Yasmeen Nazir finds herself attacked in board daylight.

The drama starts when Geoff asks Yasmeen to take the night off so that they can invite Sally and Tim Metcalfe round for dinner.

But while Geoff is keen to impress Sally with his culinary skills, Yasmeen has had a better offer and is heading into town for some wine tasting with Cathy.

Despite the fact she promises to be back in time for their dinner, Geoff isn’t happy about his other half going out… and when she loses track of time and comes home slightly worse for wear and very late for their meal, Geoff fails to see the funny side.

Knowing she’s in Geoff’s bad books once again, Yasmeen tries to apologise the following day… but her words fall on deaf ears and Geoff continues to let her feel bad about what happened.

Later his controlling ways take a sinter turn when he pours water on Ryan’s mixing decks and lets Yasmeen think that she did it… but why is he turning so dark?

Yasmeen’s week takes a horrific turn when she heads out with the Speed Daal takings and is dragged kicking and screaming into an alley way.

Tracy rushes to her aid and takes her back to number 6… but the businesswoman is clearly very shaken and is pleased when Geoff gets home to look after her.

As the police are called, Yasmeen decides she needs to be brave and wants to go back to work, but Geoff is fuming that she won’t let him take care of her and demands she stays at home.

But Yasmeen won’t hear anything of it and heads to the restaurant…  but as she walks home later that evening, she is terrified when she realises someone is following her.

Thankfully making it home in one piece, Yasmeen tells Geoff she’s sorry for not believing him and that she wishes she had stayed at home, leaving him pleased.

As Yasmeen recovers from her ordeal she starts to feel cooped up at home and wants to leave the house, but every time she tries to head out, Geoff manages to talk her out of it, desperate to keep her at home with him.

But when later in the week Alya has a gathering with friends at home, Geoff is shocked when he wakes up in the middle of the night and finds Yasmeen missing.

As he heads downstairs, he is fuming to see Yasmeen joining in with the party and drags her back to bed… but why is he so desperate for her to miss out on the fun?

But who is robbing Yasmeen’s house and are they all in danger?

Who do you think is stealing from Yasmeen? Leave us a comment on our Facebook page @EntertainmentDailyFix and let us know what you think!