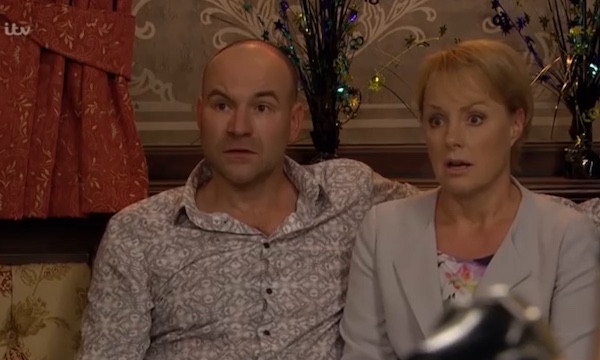 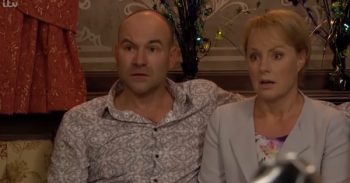 Coronation Street’s Sally and Tim Metcalfe: A history of their relationship

When Sally and Tim first clapped eyes on each other in 2013 not even Barlow’s Bookies would have laid odds on them making a go of it.

Yet six years later not only are they still together but they are one of Coronation Street’s most popular couples.

The wonderful chemistry between actors Sally Dynevor and Joe Duttine landed them a British Soap Award for Best Onscreen Partnership in 2015.

For Tim and Sally the last 12 months have been some of their toughest ever but as our history shows they’ve weathered many a storm.

As Tim has only been onscreen for six years and most of them have been spent with Sally he’s a bit of a closed book when it comes to past relationships.

The mother of Tim’s daughter Faye was Jenny Butler but we never met the heroin addicted mum who later overdosed.

Sally’s previous have tended to fall into two camps – high flying businessmen to match her social aspirations and working class labourers to provide stability for her family.

The former is stuffed with louses like Frank Foster and Duncan Radfield whilst the latter is topped by Kevin Webster, garage owner, twice former husband and dad to Rosie and Sophie.

Sally and Tim take it upstairs

Sally might not appear the most forward of women but when Tim told her he was moving to Newcastle to stay out of Faye’s life Sally decided there was no point in hanging about.

The catalyst was a disastrous internet date with Sally and an insurance bore called Neil. After that she was all ready for a bit of comfort from Tim with Duran Duran’s Save a Prayer on the stereo.

He did admit to her that he was a bit surprised that she didn’t want to be wined and dined first.

“You can buy me breakfast,” said Sal with her best sexy smoulder. He didn’t need asking twice.

Tim’s proposal not to get married

Tim never made any secret of the fact that he was someone who loved an easy life with as few commitments as possible.

He treated his first liaison with Sally as a one-night stand (much to her fury) and stood her up a couple of times even after they got together.

They first got engaged by mistake when Sophie’s girlfriend Maddie saw Tim coming out of a jewellers and got the wrong end of the stick.

When Sally and Tim agreed it was actually too soon he won her heart by proposing to her in The Rovers that they should instead just remain as an unmarried couple.

Sally’s jealousy over Tim and Anna

It was a big thing when Tim faced his reading problems and decided to do something about it. Unfortunately that something didn’t include telling Sally.

Instead Tim asked Faye’s adoptive mum Anna Windass for help and when Sally caught Tim sneaking round to Anna’s she jumped to the wrong conclusions.

“Of all the people, I thought you had better taste”, said Sal before chucking all Tim’s possessions out of the bedroom window.

Thankfully it got sorted but Sally letting rip was glorious to see.

A drop too much wine and Sally’s lofty dreams of buying Underworld were the catalysts for a potentially catastrophic snog between Kevin and Sal.

Sally might have got away with it if it hadn’t been for a drunken Anna Windass spilling the beans in The Rovers in the middle of the live 60th anniversary ep.

Unsurprisingly Tim called the wedding off but didn’t actually thump Kevin who, to be fair, had asked Sally what the hell she was playing at as soon as it happened.

Everyone tried to convince Tim that it had been a moment of madness on Sally’s part but it looked like Nick’s Bistro might not be needed for the wedding after all.

Bended knee proposals have become a Sally and Tim trademark. First Tim did it on the cobbles with Take That’s Greatest Day blaring out.

Then Tim did it again to ask Sal not to marry him when they both felt it was all moving too fast.

Bended knee take three was a real last ditch effort from Sally after Kevingate. Craig used his art skills to come up with some suitable graphics.

But even after all that Tim wasn’t sure he could ever forgive her.

“Timothy Osmond Metcalfe, you drive me mad. You’re messy and you’re so laidback you’re in a different timezone…”

As marriage vows go it wasn’t the most promising start by Sally. She went on to say though that Tim was also kind, funny, patient and a great dad to Faye.

By the time Tim had read his and told Sally that she made him “stronger, braver and happier” there wasn’t a dry eye in the house.

All that was left was for Tim to carry his new bride over the threshold. Unfortunately he did his back in lifting her so he dropped her on the grass instead.

Sally and Tim do Dollar

Sally told Tim on their wedding day just how much he makes her laugh but what we also love about them as a couple is they really fancy the pants off each other.

When Beth and Kirk decided to have an 80s themed wedding Tim and Sally decided to go as two of their favourite pin-ups David Van Day and Thereza Bazar from Dollar.

The pair got so into each other in their wigs and outfits that they missed the wedding and christened their new sofa instead.

“We’re just going to have to go to the party and come up with some story about how we got tied up,” said Sally. And that set them off again.

“If you give me this opportunity on election day I will make any sacrifice, face any hardship in the service of the people in this great ward.”

When Sally set her sights on becoming Weatherfield’s answer to Hillary Clinton Tim was less than impressed.

“You’re a local councillor, not Barack Obama,” was his verdict before heading off to the pub.

Credit where credit’s due, Sally did actually become mayor but that was where hers and Tim’s marriage problems properly began.

Sally’s do-gooding led her to make a massive error of judgement which would affect her and Tim like nothing had before.

It started for Sally with the best of intentions. ‘Widower’ Duncan Radfield approached her about a charity set up in his wife’s name which had missed the deadline for a council grant.

Tim smelled a rat when Duncan (Nicholas Gleaves) made a big show of giving her flowers but neither of them had any idea what was to come.

When Sally fast tracked £40,000 to Duncan for supposedly vital new medical equipment it set in motion a con that would have Sal jailed for four years for fraud.

Worse than that Duncan made Tim believe that Sally had had an affair. “Every time I close my eyes I see you and him together.”

Sally’s sister Gina (Connie Hyde) was the last person Tim thought he’d ever be shaking hands with after her testimony helped Sally get sent down and then she tried to seduce Tim.

Gina’s jealousy of her sis got the better of her and arch manipulator Duncan played her like a bow fiddle.

That would have been curtains for Gina – and Sally and Tim’s marriage – if she hadn’t then uncovered the truth that Duncan’s wife wasn’t dead after all.

A confession from Duncan saved the day. And Tim would have cause to thank Gina one last time before she left.

It’s not surprising Tim suffered a minor heart attack recently. In the space of a year he’s nearly lost Sally twice. First to prison and then when the factory roof caved in.

The stress of all that and working a 17 hour shift at the cab firm and the terrors of season two of Zambezi would be enough to finish anyone off.

Sally felt awful that she didn’t spot the signs but at least Gina did which gave Tim and Sally a chance to finish things on better terms when Gina departed.

Are we alone in hoping Tim and Sally could just have some quality quiet time now? With maybe the odd bit of canoodling. They’ve earned it.

What’s your favourite Sally and Tim moment? Leave us a comment on our Facebook page @EntertainmentDailyFix and let us know what you think.