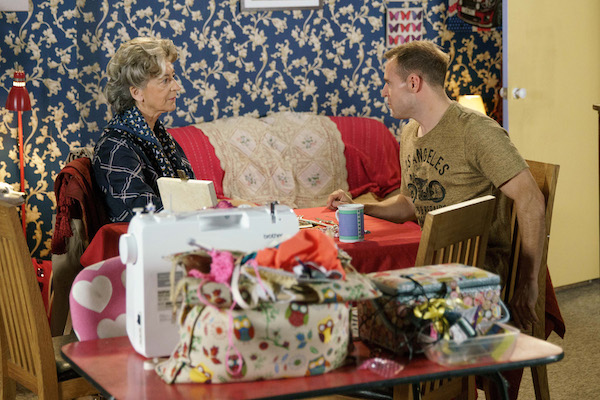 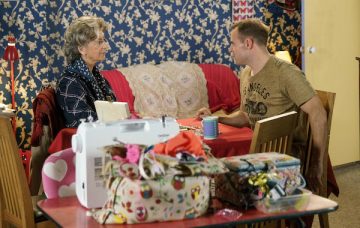 Evelyn finally reveals the whole truth about Tyrone's past

Tyrone Dobbs is left totally heartbroken next week when Evelyn Plummer finally – and somewhat reluctantly – reveals the whole truth about his past.

The pair have just started to get their grandmother/grandson relationship on track after meeting each other properly for the first time last year.

And with Fiz also out of the picture, having moved away to help daughter Hope get help with her wayward behaviour at a new school, Tyrone and Evelyn have got closer than ever.

But their future was thrown into jeopardy when James, an old friend of Evelyn’s, revealed that she has been keeping a huge secret from her grandson all this time… that she was the one who left him on the doorstep of a police station when he was a baby, not his mother.

As Evelyn packs for her holiday with James next week, Tyrone is frosty with his grandmother, and Evelyn knows something is wrong.

Eventually Ty reveals what James told him, and it’s clear from Evelyn’s face that he was telling the truth.

Realising that she has no choice but to be honest with Tyrone, Evelyn reveals the whole sorry truth to the mechanic… a story which is set to break his heart.

Evelyn tells her grandson that his mother Cassie was a drug addict and that it was her, and not Cassie, who left him on the police station door step as a baby because she thought it was the kindest thing to do.

Evelyn pleads with Tyrone to believe how sorry she is and how she has never stopped thinking about him all these years.

She tells him that she still wants to be part of his life, but how will he respond now he knows everything?

It seems Tyrone can’t get past what Evelyn did all those years ago and bitterly tells her to enjoy her holiday with James, and not to bother coming back when she returns.

Evelyn begs Roy to talk some sense into Tyrone, but will it work?

Roy warns Tyrone that he could lose Evelyn for good, and admits that he regrets his fractured relationship with his mother, Sylvia, who died recently.

Taking what Roy has said on board, it looks like Tyrone has got some serious thinking to do.

But while he is pondering over whether he was forgive Evelyn for her lies, she is heading off on her holiday to Italy, thinking that her grandson doesn’t want anything to do with her.

Will Tyrone be able to catch up with her before she leaves?

Do you think Tyrone should forgive Evelyn? Leave us a comment on our Facebook page @EntertainmentDailyFix and let us know what you think!