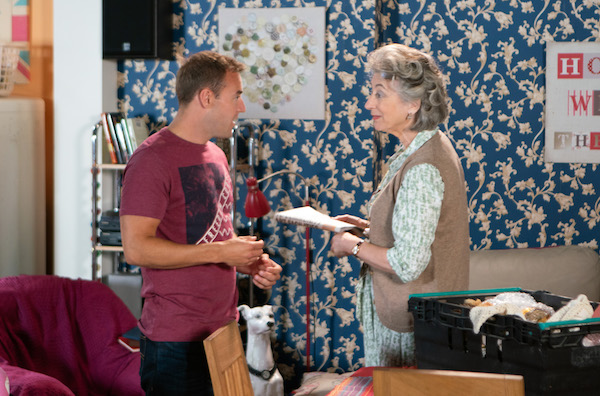 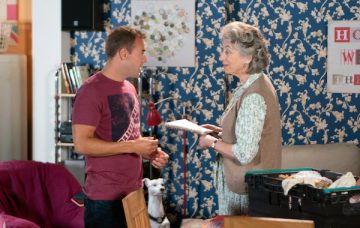 Just when Tyrone thought he knew everything about his gran, he unearths something huge

Tyrone Dobb’s relationship with gran Evelyn Plummer is thrown into question next week when he finds out she has been keeping huge secrets from him ever since she arrived in Coronation Street last year.

Despite the rocky start to their relationship, Tyrone and Evelyn have grown closer over recent months.

And with Fiz currently out of the picture as she’s taken troublesome daughter Hope to a school for behaviour difficulties, the pair have been left to fend for themselves.

But next week sees their new-found respect for each other thrown into question when Tyrone starts to think Evelyn is hiding something from him, and it turns out he is right.

Read more: What you can expect from the Coronation Street tour

When the mechanic discovers his gran failed to show up at her bingo session, and also forgot to collect Ruby from school, he starts to panic that she might be losing her memory.

But when he questions Evelyn about her forgetfulness she doesn’t want to hear a word and dismisses his concern when he suggests she makes a doctors appointment.

So when Evelyn reveals she’s going away for a few days, Tyrone is convinced something sinister is going on and decides to follow her.

But when he sees her knocking on a stranger’s door and being let in by a man in a wheelchair, Ty can’t help but wonder what on earth is going on.

Deciding the only way to get to the bottom of what is going on is by confronting his gran, Tyrone knocks on the door and finds out the mystery man is an old friend of the family.

The man is called James, and Tyrone is totally thrown when he reveals his parents died when he was young, so Evelyn took him under her wing and now every year they go on holiday together.

Read more: Where is Coronation Street set? The real location of Weatherfield

Tyrone is shocked by this new side to his gran that he didn’t  know existed… but that’s certainly not the biggest shock he is getting that day.

Jealous at the bond that James and Evelyn clearly share, Tyrone delves deeper… but it is only when James accidentally drops a huge bombshell about Evelyn that everything changes for the dad-of-one.

But what did James reveal about Evelyn that could upset Tyrone so badly?

What do you think Evelyn has been hiding? Leave us a comment on our Facebook page @EntertainmentDailyFix and let us know what you think!