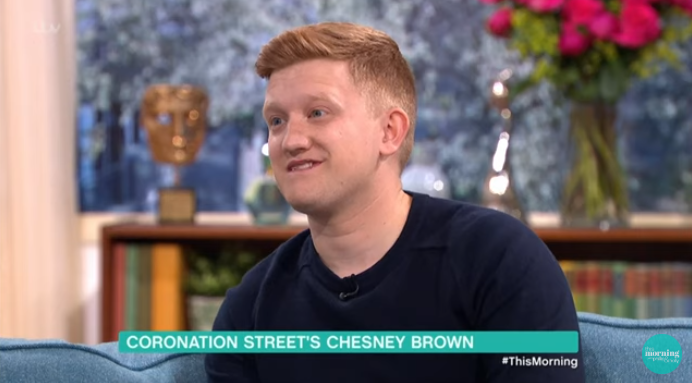 He's got how many brothers and sisters?!

Sam Aston has given his first ever solo TV interview on This Morning and the Coronation Street actor has revealed he comes from a rather large family.

The star, who plays Chesney Brown on the ITV soap, said his current storyline, which sees Gemma Winter expecting quads with Ches, isn’t daunting as he’s one of nine children.

He also revealed he has 15 nephews and nieces – so he’s definitely used to being around kids!

Sam, 26, told hosts Phillip Schofield and Holly Willoughby: “Normally when you have a baby you have twins [on set].

“So, I imagine it will have to be double because they can only be on set for so long.”

The actor made his debut on the cobbles in 2003, and he also talked to Phil and Holly about being able to juggle going to school and being on set with the help of his supportive family and his grounded co-stars.

He said: “You’d have a minimum of three hours tutoring per day, you’d finish on set and then you’d go off and do your school work.

“I felt a big weight off my shoulders when I didn’t need tutoring anymore.

“I suppose it’s not an ordinary upbringing but I was very lucky with my family, my mum and dad, and as well though Corrie itself, everybody there is so normal and down to earth, I think if you did let it get to you a bit, it probably wouldn’t.”

And Sam insisted that when he went for his first audition for the soap, he wasn’t nervous because he didn’t “understand the magnitude” of the show.

He added: “I got the audition for Corrie, but no [I didn’t realise how big it was]. I was nervous but I think if I was to do it now, I’d be like ‘Oh my goodness’ because it’s massive.

“You don’t understand the magnitude because when you’re eight or nine years old because I was just doing something I enjoyed.”

The ITV soap star also insisted that it was “daunting” growing up with the show and having to attend school, but he “soon made friends”.

He said: “It’s tough I suppose. I remember starting high school, it was a bit tricky because I went at a time when I was really busy in the show that was a bit daunting, but I soon made friends.”

The actor revealed he likes to live a “quiet life” at home with his new wife, Bryony, and their dogs.

It’s good he’s got that them at home because on set Chesney’s life is going to be anything but quiet!

Are you looking forward to Chesney and Gemma having quads? Leave us a comment on our Facebook page @EntertainmentDailyFix and let us know what you think!