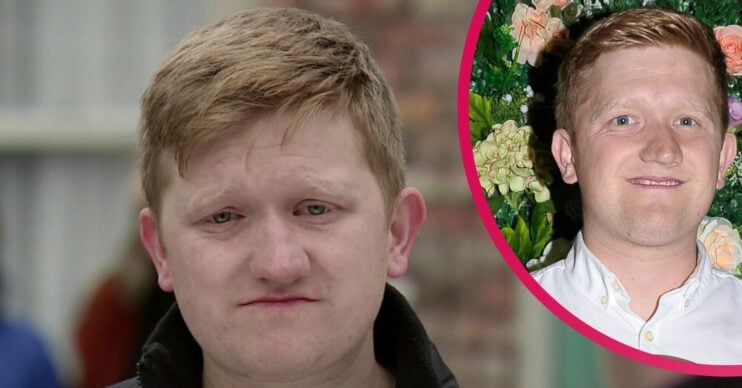 Coronation Street’s Chesney Brown arrived in 2003, aged nine, when he came to live with his mother Cilla and her latest boyfriend, Les Battersby.

Immediately capturing the hearts of the nation with his red hair and cute, cheeky smile, Ches quickly became a firm favourite.

He’s never left, and is now approaching his 19th year on the cobbles.

Meanwhile, Sam Aston, who plays him has also been on the Street for almost 19 years and is now expecting his second child himself, but he has admitted he had very real fears about becoming a dad again.

Who are Chesney Brown’s parents?

Chesney didn’t have the best start in life given his mother was Cilla Battersby-Brown (Wendi Peters). Mouthy, trashy and would take candy from a baby, she in fact did from Ches on more than one occasion.

Young Chesney, brother of Fiz Stape (Jennie McAlpine) was left home alone by Cilla when she moved in with Les Battersby.

When Les found out, he brought Ches to live with them and became his surrogate daddy.

In 2004 Ches fell into some shelving at the Kabin. Cilla spotted an opportunity for compensation, causing Rita Tanner to end up in court.

Cilla flitted in and out of Ches’s life, made him feel generally unloved and constantly tried to rope him into one scam or another. Even though Cilla is no longer living on the Street, things remain strained between mother and son.

Coronation Street’s Chesney and the true love of his life: Schmeichel

It’s often said man’s best friend is his dog. Never a truer word has been spoken about Chesney and his pet pooch Schmiechel.

In 2004 Cilla left Chesney and he was distraught, attempting to run away himself. But Les took him in, and Jack and Vera Duckworth gave the lad a Great Dane named Schmiechel.

The two were inseparable. Perhaps Schmiechel’s most memorable moment was when he bounded into the bath tub with Les and Cilla and made them all fall through the ceiling.

Tragically, Schmiechel was diagnosed with liver cancer in November 2011. Chesney said a heartbreaking goodbye to his best friend as the vet put him to sleep.

Who has Chesney dated?

It’s hard to imagine Chesney as a ladies’ man, but that’s what he’s matured into.

His first serious relationship was with Katy Armstrong (Georgia May Foote). As 16 year olds they decided they wanted a baby. Katy fell pregnant and the pair were ecastatic.

Joseph was born on December 23, 2011 during the nativity play – hence the name.

Katy struggled being a mum though, and started leaving the baby home alone. Despite Ches’s continued support, she ended up leaving him for Ryan Connor.

Ches moved on with Sinead Tinker, but then Katy begged for a reunion. He took her back. However that didn’t last long and he went back to Sinead.

But by 2017 she’d grown tired of life with Ches and left him for Daniel Osbourne. Things didn’t work out and Sinead and Chesney reunited again.

But it wasn’t to be and he called it off on their wedding day. He told her he just wanted a surrogate mum for Joseph and didn’t really love her.

Chesney later realised he quite liked his mate Gemma Winter. He didn’t think she felt the same, so he started dating hairdresser Emma Brooker to make Gem jealous.

Gemma actually did feel the same and even though Emma fell for Ches, she stepped aside and let them be together.

Gemma then fell pregnant with Chesney’s baby, which turned out to be babies as she gave birth to quadruplets.

The pair got engaged and are juggling life as a family of seven and the financial pressures that go with that.

Where does Chesney work?

Chesney quit school as soon as he was 16 to sell dog collars on the market.

Ches started working at Prima Dona Kebabs to make ends meet. He’s since been promoted to manager, but has had a few work scares.

After being stabbed with a broken bottle in the Bistro, Chesney started to have panic attacks. A particularly bad one in the kebab house saw him flee leaving the place unmanned in the middle of his shift.

He nearly risked losing it all again in 2018 when he staged a robbery to steal the takings from Dev to pay for potentially life-saving cancer treatment for ex-girlfriend, Sinead.

Once Gemma had the quads the family were signed up as the face of Freshco. However, the photoshoots and time away from work angered Dev.

Ches quit the kebab house, but was soon back working there when it went wrong with the Freshco contract.

Chesney is played by Sam Aston.

Sam was born in June 1993 and is 28 years old. He has played Ches since the beginning, making him just nine when he joined the soap.

Sam married long-term girlfriend Briony Gardner in 2019 after getting engaged in 2017.

They welcomed their first son, Sonny, into the world in August 2020, just weeks after their first wedding anniversary.

Last year Sam revealed that the couple is preparing to welcome another baby into their family in 2022!

When is Sam Aston’s baby due?

In an interview with OK! magazine in December, Sam and Briony confirmed the gender of the newest addition to the family.

They told the mag that they were feeling “very lucky” to be expecting the arrival of a baby girl in May.

Sam revealed to the publication that he was expecting to have another boy before he learned the news that baby number two was going to be a girl.

“I could see us having another boy so it was a really nice surprise. I was quite shocked, I don’t know why, because it’s a 50/50 chance!”

Sam also revealed his very real fears about becoming a dad again as he was was nervous that he and Briony would be expecting twins!

“There are twins in Briony’s family, so when we went in I was a bit nervous and said, ‘There’s definitely only one in there, right?'”

The couple also said they believe it was destined that they had a little girl this time around because they only had girl’s names that they liked in mind.

However, Briony admitted that her second pregnancy came as a surprise, and so they feel “very lucky” to be expecting again.

She also said she doesn’t feel like they are done with having children.

Despite Sam’s fears of having twins, will he end up with as many kids as Coronation Street’s Chesney?!