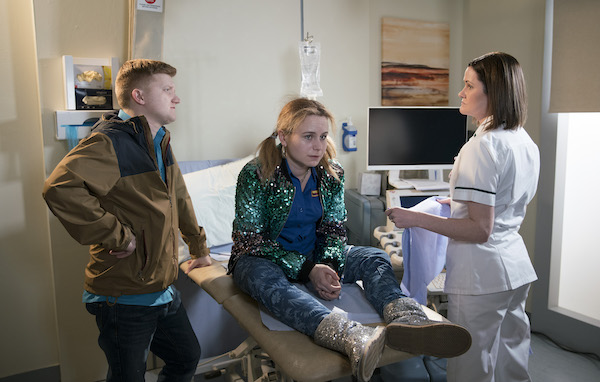 Gemma Winter and Chesney Brown get the shock of their lives in next week’s Coronation Street when they discover they’re not just having one baby, but four!

The pair have been through the mill recently… after taking forever to get together, they finally became a couple, only to find the road to romance was a rocky one.

The pair finally split after a short time together, but just as Chesney ended their relationship, Gemma discovered that she was pregnant.

But while the pair have remained united for the sake of their baby, they’re in for a huge shock next week when they find out the real reason Gemma’s morning sickness has been so bad.

With Gemma sick as a dog, Chesney and Rita beg her to go and see a doctor, worried that she might need some medical attention.

But Gemma refuses point blank to see anyone, determined to cope with her pregnancy alone.

However when her sickness gets so bad that she collapses, Chesney decides to take her to hospital, determined to find out what is making her so ill.

As the pair are told that they’re going to do a scan, Gemma is worried and reminds Chesney that she has a family history of twins.

But it soon turns out that twins would be the least of their worries when the sonographer does a scan and makes a shocking discovery.

Instead of double trouble, Chesney and Gemma soon find out that trouble comes in fours, because they’re expecting quads!

As the pair struggle to get their heads around the news they’re soon going to have five children between them, they head back to Coronation Street and let the news sink in.

Having been given information on multiple births, the pair talk through their options, and decide that selective termination isn’t for them and that they want all four babies to have the same chance of survival.

Thankfully Gemma and Chesney are on the same page when it comes to their babies’ futures… but will it always be that way?

Later in the week Gemma is gutted when Rita reluctantly admits that her flat is too small to accommodate Gemma’s growing brood and that she’s too old to cope with four babies under her roof.

But where will Gemma live now?

Chesney comes up with a solution and asks her to move back in to No. 5.

Gemma isn’t keen on moving back in with Chesney after their split, but seeing as she doesn’t have much choice in the matter, it looks like the former couple could soon be living together again.

As news that Chesney and Gemma are expecting quads spreads around Weatherfield, Jenny decides to start a collection to raise some much-needed funds for the pair as they prepare for life with four babies.

But where does this leave the former couple’s relationship? Will having four children together bring them closer together, or will this tear them apart for good?

How do you think Chesney and Gemma will cope with four babies? Leave us a comment on our Facebook page @EntertainmentDailyFix and let us know what you think!