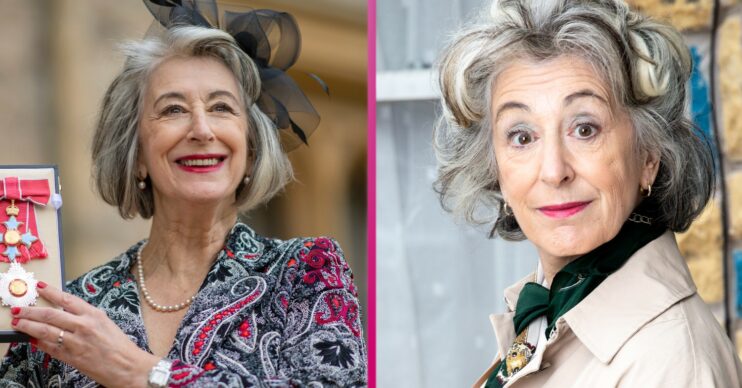 Coronation Street star Maureen Lipman: Does she have a famous husband?

Is she married to TV and radio star Gyles Brandreth?

Coronation Street star Maureen Lipman is a national treasure whose career has taken her from sitcoms, to the stage, to those BT ads, children’s telly, writing and her own one-woman comedy show.

She’s famously proud of her Jewish heritage, outspoken about her opinions, and an all-round British fave.

And of course, she’s now become an important part of Corrie too. Though this isn’t the first time she’s been linked to the show.

Is Maureen married? Who is she married to?

In 1974, Maureen tied the knot with playwright Jack Rosenthal. He wrote more than 150 plays and screenplays and also wrote 129 episodes of Coronation Street when it began. There is a street in Manchester named after him.

Maureen and Jack had two children, Amy – who is also a writer – and Adam.

Read more: Rita Sullivan in Coronation Street: Who was she married to?

In 2008 Maureen met Guido Castro, a retired computer expert. She and Guido didn’t marry but stayed together until his death in 2021.

Why do people think Maureen Lipman is married to Gyles Brandreth?

Maureen appeared on Celebrity Gogglebox alongside her firm friend Gyles Brandreth. The pair watched Naked Attraction and were not impressed by the show!

Maureen and Gyles are good friends but they’re not married. Gyles has been married to Michele Brown since 1973.

Who does Maureen Lipman play in Coronation Street?

Back in 2002, Maureen appeared in Coronation Street as snooty relief landlady Lillian Spencer. She was an old friend of Fred Elliott and thought the Rovers was a comedown after the impressive Xanadu Cocktail Bar of the Majestic Hotel in Cleethorpes.

Lillian only stayed in Weatherfield for a couple of weeks.

But in 2018, Maureen was back on the cobbles, playing Evelyn Plummer, the grandmother of Tyrone Dobbs.

Sharp-tongued Evelyn was prickly and unpleasant but soon became a fixture on the Street and Maureen has brought a lot of humour to the show.

Evelyn’s showed her softer side, looking after Hope and Ruby and supporting Fiz through her break-up with Ty.

Evelyn’s quick comments, barbed asides and love of her dog Cerberus, have made her a firm favourite among the fans.

How old is Maureen Lipman?

When did she become a dame?

Maureen was awarded a CBE in the 1999 New Year’s Honours List. In 2020, she was named Dame Commander of the Order of the British Empire, for her services to charity, entertainment and the arts.

She received her honour from Prince Charles in October 2021.