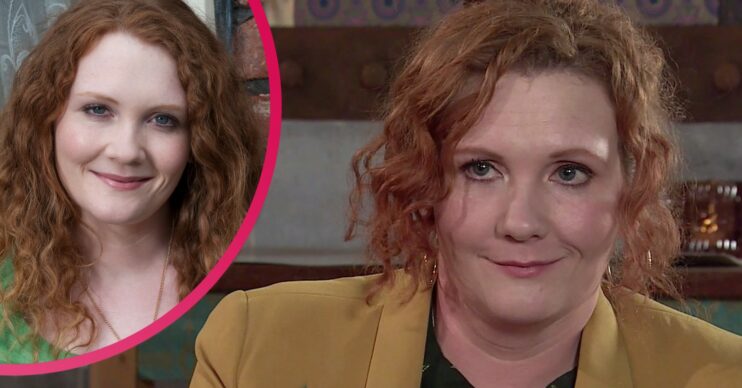 Fiz Stape in Coronation Street: Who is she? Who was her serial killer husband? And why did she go to jail?

She is the queen of bad boyfriends!

Fiz Stape in Coronation Street is the bolshy, caring ex-partner of Tyrone Dobbs.

She’s the devoted mum of Hope Stape and stepmum to Ruby Dobbs, as well as being Chesney Brown‘s big sister.

Fiz, whose real name is Fiona, was brought up in care after some sub-standard parenting by mum Cilla Brown.

She arrived in Coronation Street to be fostered by Roy and Hayley Cropper and she herself took on the care for little brother Ches when Cilla abandoned him, too.

Jennie McAlpine has played Fiz Stape in Coronation Street since 2001.

Jennie started her career in showbiz as a teen when she did stand-up comedy. She played Michelle Morley in Emmerdale for a year, then landed the role of Fiz – which was originally just for five episodes! Twenty years later Fiz is a firm fixture on the cobbles.

In 2017 Jennie took part in I’m A Celebrity and came fourth, proving a real hit with fans.

Jennie is married to restaurant manager Chris Farr, and the couple have two children Albert and Hilda – good Corrie names!

How old is Fiz?

She will turn 38 this year.

Jennie McAlpine was also born in 1984, in February, so she is seven months older than her alter ego.

Who was Fiz’s husband on Coronation Street?

Fiz met old boyfriend John Stape through her brother Chesney. John was a teacher at Weatherfield High where Ches was a pupil.

He and Fiz got together and they were happy for a while – or so Fiz thought.

But John was cheating on Fiz with teenager Rosie Webster and the sleazy affair was revealed on Christmas Day thanks to a mix up with presents!

Fiz and John eventually got back together, but Fiz was unaware that while John was off ‘feeding his gran’s cat’ he was actually checking on Rosie, who he’d kidnapped and was holding prisoner in his late grandmother’s house!

But soft-hearted Fiz couldn’t resist John when he began writing her letters from jail, begging for forgiveness. The couple got married while John was still in prison.

Once he was released John moved back to the Street with Fiz and got a job in Roy’s Rolls. And he was thrilled when Fiz told him she was pregnant.

But he really wanted to go back to teaching (should have thought about that before he kidnapped a pupil, eh?).

He stole the identity of his colleague Colin Fishwick, who’d moved abroad, and began teaching under his name.

John then hid Colin’s body when he dropped dead from a heart attack and also killed another former colleague, Charlotte Hoyle.

Fiz gave birth to Hope prematurely on the day of the devastating tram crash, just as John was attacking Charlotte!

Why did Fiz go to prison?

A shocked Fiz was troubled when she discovered ‘Colin’ had inherited his mum’s money.

Struggling to cope as a single mum with a new baby, she accepted the money.

Helpful as ever, John did a runner, leaving Fiz to pick up the pieces. She was sent to prison for fraud and later for the murder of Colin Fishwick.

When John returned, he kidnapped Rosie again and crashed his car, dying from his injuries. Fiz was released from prison. Phew.

Fiz supported old flame Tyrone Dobbs through his abusive relationship with Kirsty Soames, and helped him care for baby Ruby.

The pair got together and built a blended family with the girls being brought up as sisters.

They got through tough times like Hope being diagnosed with cancer, money troubles, Hope’s behaviour problems, and the arrival of John Stape’s long-lost daughter Jade Rowan, who was intent on taking revenge on Fiz.

But things went wrong when Tyrone fell in love with younger woman Alina Pop. He dumped heartbroken Fiz and moved in with Alina, who was pregnant.

Alina lost the baby after a fire at the flat – started by Hope. She and Ty broke up but Fiz had moved on.

Hope and her bad behaviour

Fiz’s daughter Hope causes her nothing but heartache.

She shares the youngster with John, but Ty has largely brought Hope up as his own.

However, Hope shows more than a few tendencies of her father.

She likes to start fires and clearly has a problem.

The little girl was sent to a special school in Birmingham to deal with her behavioural problems, but she returned no better.

Her latest scheme was to hide cousin Joseph to make his family think he’d run away.

So with several fires under her belt, just what else Hope is capable of, no one knows…

Who is Fiz Stape’s boyfriend in Coronation Street?

Although Tyrone is keen to win Fiz back, his attempts have been thwarted by her new fella, Phill Whittaker.

He seems like Mr Nice Guy, dotes on Fiz and Hope and Ruby, and even stood up to his overbearing mother, Mimi, when she insulted Fiz.

Phill has tried to be friends with Tyrone and welcome him into their new family unit. A kindness Ty repaid by trying to kiss Fiz over Christmas.

Is Fiz leaving Coronation Street? Does she die?

Now Fiz and Phill are planning to move in together and sell No.9, the home she built with Ty, to pay for the move.

Is she really going to leave the cobbles after all this time?

Fiz has been a mainstay for almost 21 years, surely she wouldn’t turn her back on it all?

In 2019 Jennie told Humans of XS Manchester podcast that she was “fine playing this one character.”

She revealed she had no intention of leaving and wanted to stay for the rest of her career – assuming the writers want her!

“I can’t take it for granted, because they might have other ideas,” she said.

Meanwhile, show fans are convinced Phill is not all that he seems and that he’ll hurt Fiz in the long run.

Could he even go so far as to kill her?

She’s already escaped one serial killer husband with her life in tact, but could she lose it to another?

Or could her pyromaniac daughter take her mother’s life by mistake instead?