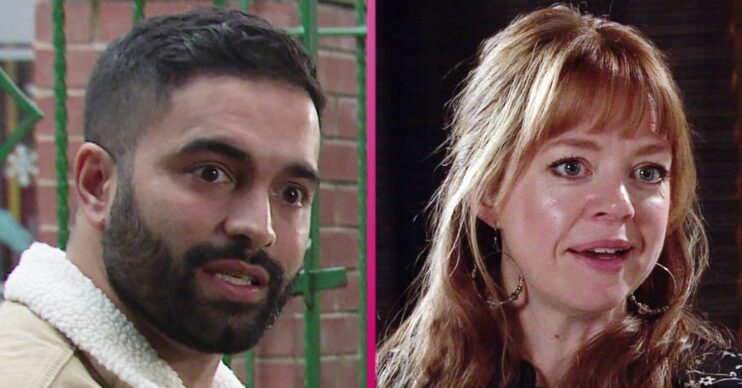 Abi was shocked when she went into labour

Coronation Street spoilers for tonight (Monday, March 14) reveal Imran finds out he is the father of Abi’s son.

Meanwhile Daisy makes a deal with Max and Grace returns to cause problems.

Tonight Abi assures the social worker that she’s enrolled in rehab and will do whatever it takes to keep her baby.

Abi tells Toyah she has to prove that she can offer Alfie a proper home. Later Toyah quizzes Imran about her ‘ex client.’

Soon Imran tracks Abi down at the hospital where she admits he’s the father of her son.

In shock, Imran asks if he can see the baby.

However as they turn they see Toyah watching from the corridor. Will an emotional Imran tell her the truth?

Daisy makes a deal with Max

Daisy apologises for her jealous behaviour, but when Daniel reveals Nicky is applying for the teaching assistant post and Max will be in her class, furious Daisy forms a plan.

Later Daniel helps Nicky prepare for her interview. Nicky tells hi she wants to keep her sex worker history under wraps and Daniel doesn’t want Daisy to find out.

Michael’s delighted when Grace returns to the cobbles for Glory’s birthday, while Ed and Aggie shared worried looks, knowing why she really left in the first place.

What does she Grace want?

When Laura admits her pain is getting worse, a guilty Gary urges her to cancel the PI and see the doctor instead.

Will Laura take his advice?

Tracy reveals her plan to Amy for them to spend some mother and daughter time. However Amy is gutted, realising she’ll have to cancel her night with Jacob.

Will they get to see each other?