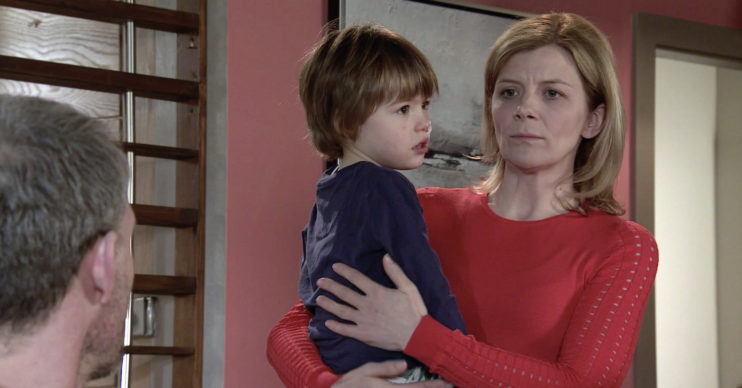 Coronation Street SPOILERS: Things begin to look up for Oliver?

Oliver has been unwell for a while

In next week’s Coronation Street, Leanne continues to worry about her son. But could things be looking up when she starts to see a glimpse of the old Oliver?

Over the last few weeks, with Oliver being in and out of hospital and needing tests, Leanne has tried to keep an eye on him constantly.

But in upcoming scenes Oliver’s dad and stepmum Tracy call to see how the toddler is.

Tracy manages to persuade a reluctant Leanne that they should all have a family day out at the petting zoo as it will do Oliver good.

Leanne, Nick, Steve, Tracy, Simon, Emma and Amy all take the little boy to the petting zoo. Although Leanne tries to relax, she can’t take her eyes off her son.

When Oliver spots some cows he makes a mooing noise and starts laughing. Leanne is utterly thrilled to see a flash of the old Oliver.

Are things looking up for them?

Leanne really feels as though Oliver is showing signs of improvement when he wants to eat again.

However, she is left reeling when Amy reveals Steve has booked a trip for them all to Cornwall. Leanne does concede the getaway could be good for them, but they have to see the consultant first.

They head to their appointment to see if Oliver’s tube can be removed, but what news will they get about Oliver’s condition?

Is there light at the end of the tunnel?

Meanwhile next week, Leanne’s stepsister Toyah makes a decision with her boyfriend Imran.

In the cafe, Nina begins making placards for a protest. She explains to Toyah that she and Evelyn are off to lobby the local MP. Roy gives his niece his full support.

Promising Imran she won’t get arrested, Toyah goes with them. After a successful protest, Toyah hurries home to Imran in time for their fostering meeting. Are they going to become foster parents?

What is wrong with Oliver?

Over the last few weeks, Oliver has been having fits. After being rushed into hospital, doctors suspected he could have mitochondrial disease.

After he came off sedation, Steve and Leanne were both warned he may have suffered brain damage.

Although he has returned home, Leanne has been making sure she’s the one to take care of her son. But will she end up pushing people away?

Have you been following Leanne’s storyline? Leave us a comment on our Facebook page @EntertainmentDailyFix and let us know what you think!