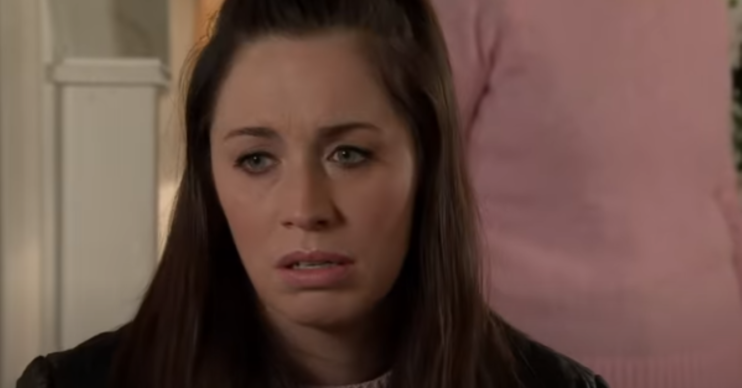 Has she regained her memory?

A new Coronation Street trailer has revealed Shona will be returning to screens soon!

Over the last few months, Shona has been in a rehabilitation centre in Leeds. After she was shot on Christmas day, she went into a coma. But when she woke up, she couldn’t remember her life with husband David.

After telling the staff she no longer wanted to see David, she stated she wants a divorce. But it looks like she will be making a return to Weatherfield soon.

In the clip, Shona can be seen in a car as it drives along the Street.

In another shot, Shona can be seen walking away from her son Clayton, who she is visiting in prison.

As she walks away, she appears to be crying and Clayton stands up, but is held back by a guard.

Later, Shona is sitting down with who looks to be Gail behind her. Has she finally regained her memory?

Meanwhile in the trailer, it looks like David has been landing himself in trouble.

He can be seen walking through a rough estate and when he spots a group of drug dealers he jumps on their car.

As he’s running away from the group, neighbour and police officer Craig Tinker spots him. In the next part, Craig and David are in Victoria Gardens and Craig tells him: “This is self-destructive behaviour.”

Towards the end of the trailer, David can be seen throwing a bike at a group of teenagers. What is he up to?

Back in February, before the soap stopped filming because of coronavirus, the show confirmed Shona actress Julia Goulding was back filming at Coronation Street.

Julia went on maternity leave in order to have her son. Although the soap is unable to film, it looks like there’s plenty still to come.

Are you glad Shona’s back? Leave us a comment on our Facebook page @EntertainmentDailyFix and let us know what you think of this story.