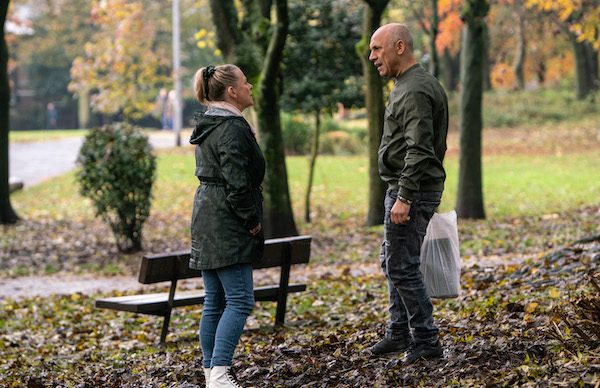 Will he finally face justice?

Viewers know that the villain raped Paul during his formative years, manipulating the youngster into thinking they were in a consenting relationship.

All the while, Paul’s mum Bernie Winter – Kel’s girlfriend – was blissfully unaware of the horrors happening under her own roof – something Paul has struggled to forgive his mum for.

In upcoming scenes, Bernie will track her ex down on a mission to expose his vile ways.

Next week, Kel’s sick desires will be unveiled when he attempts to groom yet another 14-year-old boy in disturbing scenes.

On Wednesday (January 15), Paul is horrified when he learns that Bernie plans to entrap Kel by posing as a young boy online.

While Gemma watches Bernie’s live feed on her laptop, Bernie talks to the camera, explaining how she intends to expose Kel as a paedophile.

In a bid to get justice for her son Paul, Bernie has set up an online account pretending to be an impressionable young boy.

And Kel falls for the scam hook, line and sinker.

Bernie is stunned when she receives a text from Kel agreeing to a one on one DJ lesson with Alfie, the 14 year old she is pretending to be.

Later, she confides in Sean about how she is posing as a teenager in order to lure Kel out and get justice for her son.

But, rather than support her mission, Sean is horrified and urges her to go to the police…

When Sean reveals Bernie’s plan to Paul, he insists he’ll go with her to the proposed meeting place.

When Kel spots Bernie in the park, he realises he has been set up and tries to grab Bernie’s phone with Paul, Billy and Gemma all in hot pursuit.

If they manage to get the phone back, will they then have all the evidence they need for the police to get a conviction of child grooming?

In distressing scenes last year, viewers watched as Bernie and Gemma discovered secret pictures Kel had hidden away of young boys – including Paul.

This led a tearful Paul to admit he had been sexually abused by Kel when he was a young teenager.