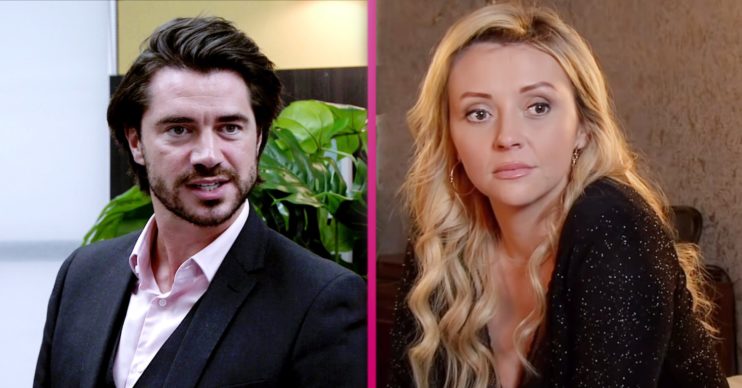 Adam finds out that daniel has been paying Nicky

For weeks, Daniel has been paying Nicky to dress up as his late wife Sinead. But when Daniel goes into the Bistro and offers Nicky double pay when she’s with another client, it all kicks off.

In the upcoming scenes, Daniel rushes to Adam’s office in a panic. He explains his friend Nicky was involved in a fracas at the bistro and needs representation.

Adam calls at the police station but discovers that Nicky has already been released without charge.

Later Nicky and Daniel get in contact and she’s touched when he explains that she helps him with his grief.

Daniel apologises to Ray for causing a scene in the Bistro. He calls Nicky and persuades her to call at the flat for a drink just as friends.

Coronation Street: Adam finds out the truth about Daniel and Nicky

Daniel soon admits to Adam that he’s been paying Nicky to dress up as Sinead so he could pretend she’s still alive, but from now on they’re just going to be friends.

Adam intercepts Nicky outside the flat and gives her some cash. The solicitor asks her to stay away from Daniel. Will she listen to Adam or continue to see Daniel?

Coronation Street: Who is Nicky?

While viewers don’t know anything about Nicky’s past, they have come up with theories about her having another connection to the cobbles.

One theory is that she knows Geoff Metcalfe. Geoff was hiring escorts when he was abusing his wife Yasmeen.

He later admitted to his son Tim and daughter-in-law Sally about hiring sex workers, but insisted it was because Yasmeen wouldn’t sleep with him.

Another theory is she is connected to Ray. This week, one of her clients is a business associate of Ray’s.

Does she already know the sleazy businessman?