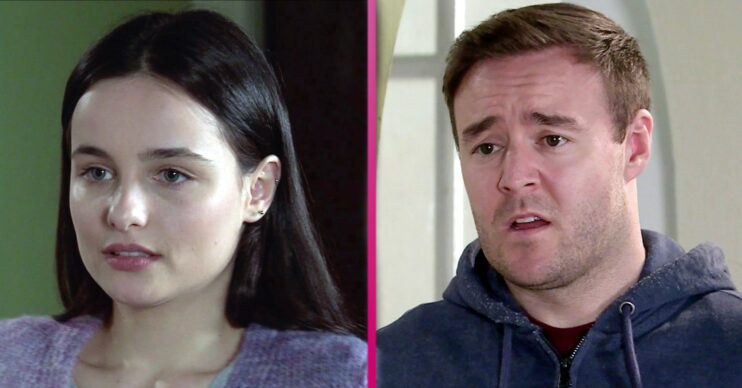 Tyrone and Alina have been together for a few months

Coronation Street star Ruxandra Porojnicu has hinted that Alina and Tyrone’s relationship could be in danger.

In this week’s scenes, Tyrone learns that his abusive ex-girlfriend Kirsty, who is also the mother of his daughter Ruby, has died.

Next week Alina masks her fears that she might be pregnant. Meanwhile Fiz and Tyrone try and organise Kirsty’s funeral.

Alina later hears about Tyrone’s past with Kirsty and is stunned. She confronts Tyrone, hurt that she’s been kept in the dark.

Soon Alina blurts out to Tyrone that she’s pregnant.

Speaking about Alina finding out about the abuse from Sally, Ruxandra has hinted it could put Alina and Tyrone’s relationship in danger.

As reported in Digital Spy she said: “It makes her start to question the relationship because this is such an important thing that he kept from her.

“Usually you would share something like this with your partner, you would open up about your past, so she feels a bit left behind when she finds out that he didn’t share this with her.

It makes her start to question the relationship.

“Also the fact that after the news about Kirsty he prefers to go and speak with Fiz about it leaves her feeling kept out in the dark.”

Alina and Tyrone have only been together for a few months, however fans have already started to suspect Tyrone is already getting fed up of their relationship.

Coronation Street airs tonight (June 25) at 7.30pm for an hour on ITV.