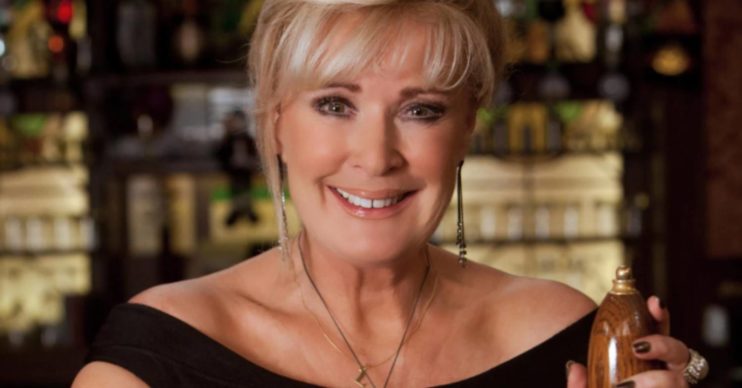 She knows how to paint over the tears and give it a bit of sparkle better than any of Weatherfield’s many feisty females.

Liz is currently away from the Street, having disappeared off screen at the top of the pandemic.

Beverley previously said she will come back to film proper exit scenes at some point in the future. But she admitted some doubt about that happening last week.

For now, let’s content ourselves with a look back at her life on the cobbles.

She learned from the best when she first worked as a barmaid at The Rovers under Bet Gilroy.

With an incompetent, abusive career criminal for an ex-husband (hi, Jim), one absentee son, Andy, and the other,Steve, present but fairly incapable, Liz has had to just get on with it.

Played over the past 30 years with fierce humanity and immaculate comic timing by Beverley Callard a Corrie scene is always the richer for a bit of side-eye from Liz behind the bar.

Now all the better for being single, Liz’s dignity in the face of Jim’s cruel ‘long lost daughter’ scam showed just how magnificent and resilient she is. Long may she remain.

Liz McDonald and her kids

When she’s not been dealing with her tempestuous love life or barring folk from The Rovers most of Liz’s time has been spent cleaning up after her troublesome twins Steve and Andy.

Andy has been the least bother since he finished uni (after initially dropping out) and headed off to Spain to teach English in 1997.

Steve is another matter altogether. His taste in exceedingly fiery women has raised Liz’s hackles and she’s done her best to scare off Karen Phillips, Becky Granger, Michelle Connor and Tracy Barlow.

Liz had a third child. Her precious daughter Katie who was born prematurely on Jan 1 1992 and died after only one day.

Liz McDonald and her wardrobe

Liz’s spectacular and eye-watering wardrobe choices were initially inspired by the unlikely makeover team of Bet and Alec Gilroy.

Eyeing her sensibly buttoned top a pre #MeToo Alec suggested that Liz could “let a bit more there circulate underneath your chin” whilst Bet assured Liz that she was “too demure altogether”.

The results have given the customers, jealous wives and her mortified sons plenty to talk about ever since.

Or as Blanche once described Liz’s ensemble: “Skirt no bigger than a belt, too much eyeliner and roots as dark as her soul.” 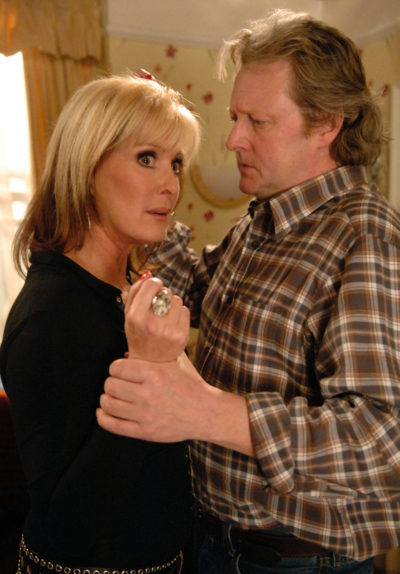 Can’t live with him, can’t live without him. That was the story of jealous first husband Jim McDonald and ‘his’ Elizabeth throughout their rollercoaster of a marriage.

They split up, remarried, divorced again and it would appear that Liz is finally shot of him though you wouldn’t entirely bet on it.

Jim’s violent temper has always been a factor. He physically assaulted Liz in 1996 after he discovered she had slept with his army pal Johnny Johnson.

Liz knows that he’s a man full of empty promises but the passion was still there last year when he walked back through the door of The Rovers to cause more misery.

“I’m too old to be standing on balconies in me underwear.” So said Liz back in 2007 after cheating on boyfriend Vernon Tomlin with brewery delivery man Derek.

Despite that, Liz and drummer Vernon did get married in 2007 but when he tried to take her away from her beloved Rovers to buy another boozer it was time to kick him into touch.

Liz has notched up plenty of other names on her bed post including Colin and Des Barnes, Lloyd Mullaney, Owen Armstrong and most recently a destructive affair with Johnny Connor.

Her love of an alpha male has often been her downfall but whether she could settle down with someone who is too pipe and slippers is debatable.

There are plenty who have felt the lash of Liz’s tongue. She once referred to Becky Granger as Steve’s “dog of a girlfriend” before Becky chucked soft shell crab at her.

Her longest running battle though has been with Tracy Barlow. It was bad enough that Steve married Tracy once let alone twice.

Tracy really thought she had Liz when she told her she’d had an affair with Liz’s boyfriend Tony on Steve and Michelle’s wedding day in 2015.

“You’re alright for your age – a bit rough round the edges”, said Tracy. Amazingly Tracy is still standing but the current impasse now that she’s back with Steve can’t last forever.

It is a measure of the depth of Liz and Deirdre’s friendship that when Deirdre passed away it was Liz who delivered the heart-breaking news to everyone in The Rovers.

Deirdre was Liz’s best pal, drinking partner and the one always first to step out for a ciggie as the pair dealt with each other’s latest crisis.

The only time they properly fell out was over the shock revelation that Tracy’s daughter Amy was actually Steve’s, a bombshell kindly detonated by Tracy at Steve and Karen Phillips’ wedding.

With all the grief Liz had to deal with when Jim last returned she’s never missed Deirdre more as that one soul she could really trust.

The loss of baby daughter Katie was both Liz’s most moving storyline and one that would be cruelly revisited 26 years later.

Liz was shocked beyond belief when Jim was released from prison and introduced Liz to their long lost daughter, Hannah, the name their baby Katie had allegedly taken after a mistaken hospital baby swap.

This was Jim’s twisted revenge for Liz not wanting him back in her life and when Hannah then resorted to blackmailing Johnny over his affair with Liz she was caught red-handed.

“I hope your innocent child knows what you did because she is in heaven and you know damn well that is not where you’re going,” were Liz’s final words to Jim.

“Do you know something? People round here think that Tracy Barlow is a nasty little cow. Well, I so wish my son had run off with her and their baby because he couldn’t have done any worse than he has with you. You’re scum, Karen. Selfish, lying, cheating, money-grabbing scum.” Liz lets rip at Karen Phillips.

Do you love Liz McDonald? Leave us a comment on ourFacebook page @EntertainmentDailyFix  and let us know what you think!