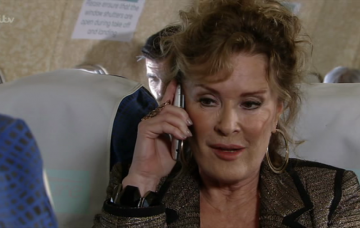 Beverley Callard would quit Coronation Street and spend her days doing DIY if she could afford it.

The 62-year-old star plays soap stalwart Liz McDonald on the ITV show, but she would much prefer to swap Liz’s famed leopard print outfits and mountains of war paint for baggy clothes and no make-up.

She said: “If I could afford it I would never go to work again, I would have no make-up on, I would wear baggy clothes.”

Beverley is such a big fan of doing jobs around her house and helping her husband out with home improvements she has booked herself on a polished plaster course.

She said: “I did labouring [on my birthday]. My husband built a chimney breast and I was his labourer.

“I was passing trowels, and emptying buckets of wood. I chipped off 600 tiles. I love it [DIY].

She said: “Many times I get into my dressing room and think, ‘No, do I really have to wear that?’

“I’m sure the costume department go shopping for Liz and just have a laugh.

“Even if they find something nice for me I go, ‘That’s really nice,’ and then they take it in, so it doesn’t fit me and I look an absolute disaster.

The cobbles star has teased Corrie fans to expect to see something “quite amazing” for Liz over the coming summer and autumn months, and dropped a huge hint her on-screen husband Charlie Lawson – who plays Jim McDonald – could be back on the soap.

She said: “The summer and autumn are quite amazing. I think Prince Andrew and Fergie are quite like Liz and Jim.”

But Bev admitted she has so many lines to learn she forgets what she acted out one week after filming her scenes.