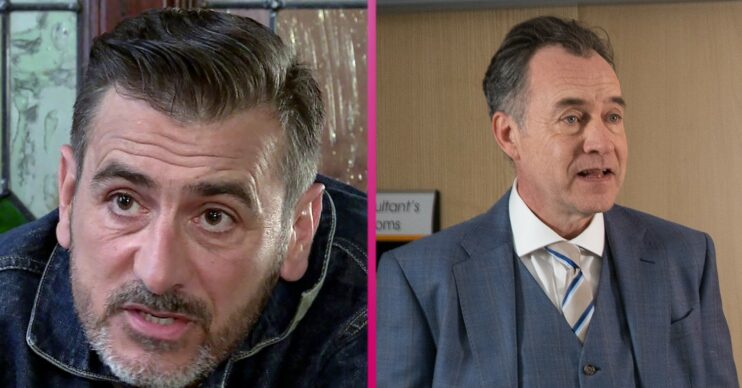 Coronation Street: Peter to go back to prison as he’s charged with assault?

Peter was charged with assault

Coronation Street resident Peter Barlow was arrested and charged for assault in tonight’s episode (Monday, May 9 2022), but could he face going back to prison?

Peter once ended up in prison when he was charged and found guilty of Tina McIntyre’s murder.

He was released when Rob Donovan confessed to the crime, but could Peter end up back in prison after hitting Mr Thorne?

Read more: Peter Barlow in Coronation Street: Just how many times has he been married?

Coronation Street: Peter to go back to prison as he’s charged with assault?

Recently viewers were introduced to Mr Henry Thorne, who is Aggie’s new boss at the hospital.

Last week Aggie overheard Mr Thorne on the phone to a colleague telling him he won a bet to perform Peter’s liver transplant in under four hours.

Aggie confronted Mr Throne about what she heard and later he was reported and his operations suspended until further notice.

In tonight’s scenes Peter bought a gift for Mr Thorne following his consultation, but at the hospital Peter and Carla found out Mr Thorne had been suspended and why.

Aggie offered to get the manager dealing with the situation and he told Peter and Carla that they discovered Mr Thorne took a selfie during Peter’s surgery, which he sent to a colleague.

Peter wanted him sacked and wanted a second opinion on his health.

Outside the hospital Peter and Carla confronted Mr Thorne wanting an apology, but he refused.

Carla managed to get Peter away, but he was still furious.

When Mr Thorne wound Peter up, Peter ended up punching the surgeon and was arrested.

He was taken to a police station and explained the situation to the officers.

However the police had no choice but to charge Peter with assault. Could he be facing prison?

What’s next for Peter and Mr Thorne?

Later this week Carla tries to make amends with Mr Thorne on Peter’s behalf. But she’s shocked when he asks her to go to dinner.

She reluctantly gives him her number on the basis he will call her about dropping the charges against Peter.

Meanwhile Mr Thorne offers to drop the charges against Peter and retire immediately if in return, Peter withdraws his complaint with the hospital.

Peter is horrified to read a message from Mr Thorne telling her he looks forward to their dinner.

What will Peter do?

Peter calls the Gazette and asks them to run an article about Mr Thorne’s unethical medical practise.

Peter asks Aggie to dig through the NHS records and provide him with any information which might incriminate Mr Thorne.

Aggie explains she can’t afford to lose her job. Will she decide to help?