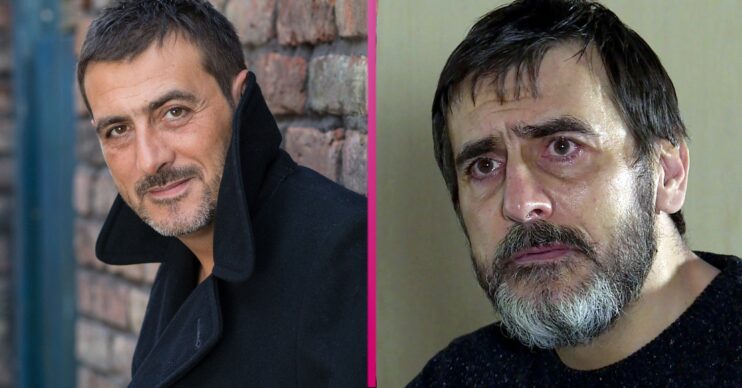 Peter Barlow in Coronation Street: Just how many times has he been married?

Two of his marriages were at the same time!

Peter Barlow in Coronation Street is one of the many Barlow men who live on the cobbles.

Though ex-Navy sailor Peter might not have inherited the pompous gene shared by his dad Ken and half-brother Daniel, he definitely got the Barlow eye for the ladies! Peter’s been married six times – with two of his marriages taking place at once! And he’s married the same woman twice.

Who was Peter Barlow’s mother?

Peter’s mum was Ken’s first wife, Valerie. He and sister Susan were twins. When Valerie was electrocuted with a faulty hairdryer in a tragic accident, Ken sent the twins to live in Glasgow with their grandparents.

The family had been about to emigrate to Jamaica before Valerie was killed. The Barlows’ life could have been very different if that had happened!

Peter Barlow is played by actor Chris Gascoyne. He’s the seventh actor to take on the role.

One of the actors who played the role as a youngster was Linus Roache – the son of William Roache, who plays Ken. Linus later appeared in the show again as another of Ken’s sons – Lawrence Cunningham.

Chris had been in various television shows, including The Secret Diary of Adrian Mole and Soldier Soldier, before he landed the role of Peter. And his first appearance on the famous cobbles was during a live episode in December 2000 – talk about being thrown in at the deep end!

Who is Peter Barlow married to in real life?

Chris is married to actress Caroline Harding. The couple have three children and have been married since 2002.

How are Adam and Peter Barlow related?

While Peter was away from the Street in the Navy, he married a woman called Jessica but by the time he returned in 2000, he was single.

He caught the eye of Rovers landlady Shelley Unwin and the pair started a relationship and got engaged. Awww. Except, while they had briefly broken Peter had a fling with a florist called Lucy Richards.

He and Shelley reconciled, but sister Tracy landed a job at Lucy’s florist shop – covering her maternity leave. It turned out, she was pregnant with Peter’s baby.

Confused, Peter proposed to Lucy too. He was thrilled when she had a baby boy – called Simon – but he was still engaged to Shelley

Peter went through with both weddings to both women, making himself a bigamist. When the women discovered what he’d done, Shelley threw him out and Lucy emigrated to Australia with Simon.

When Lucy died, Peter got custody of his son and came back to Weatherfield. He began a relationship with Leanne Battersby which hit a rocky patch when Peter’s struggle with alcoholism became a problem.

After the infamous Corrie tram crash, Peter and Leanne married in hospital.

But almost as soon as Peter recovered from his injuries, he had started an affair with Carla Connor.

Marriage to Carla – and murder!

After breaking up his marriage to Leanne to be with Carla, you’d think Peter would have been happy to settle down, right?

Instead he started a steamy affair with Simon’s babysitter, Tina McIntyre.

Carla was heartbroken but when Tina was murdered, it was Carla who stood by Peter when he was accused of the crime.

She realised he was innocent when he told her he believed she was guilty! Carla knew that meant he hadn’t killed Tina and fought to get the evidence that would secure her ex’s release from jail.

In the end, it was revealed that Carla’s brother, Rob Donovan, had killed poor Tina. And Peter left Weatherfield once more.

In 2017, Peter came home to Weatherfield with a new girlfriend – his former sister-in-law, Toyah Battersby!

The pair ran the Rovers together for a while, but when Toyah tricked him over a plan to adopt Eva Price’s baby girl, they split.

Peter and Carla both admitted they loved each other but couldn’t be together. Poor Carla was struggling with her guilt over the factory roof collapse and suffering a mental health crisis.

But they eventually reconciled. And, after a few bumps in the road – including Carla’s one-night stand with Adam – they married last year.

Is Peter going to die?

Peter’s drinking almost caused his death last year when he found out about Carla and Adam. He’d made himself so ill that he needed a liver transplant.

Though he was taken off the list for a while, he eventually received a donor liver and he’s made a good recovery.