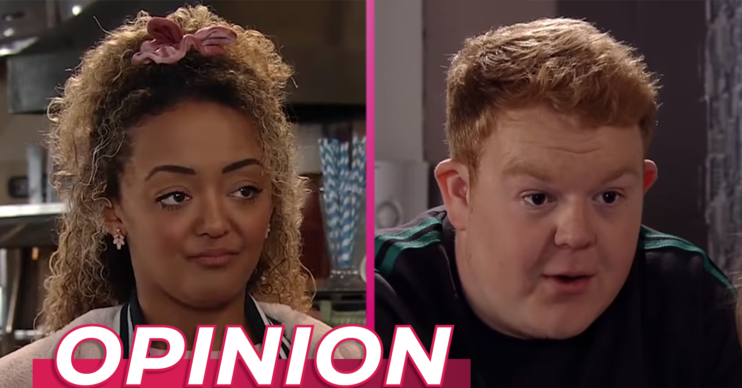 We need some happier long-lasting couples

In Emmerdale, Coronation Street and EastEnders soap characters usually go through phases of being single and in relationships – like the rest of us!

Some characters have long-lasting love but for others it takes time before they find the one they’re meant to be with.

Here are soap characters that ED! soap writer Charlotte Rodrigues thinks should get together.

During her two years on the show, Emma has been unlucky in love, having failed relationships with David, Chesney and Seb.

But could her Prince Charming be her neighbour Craig Tinker?

While Craig has had brief romances, he hasn’t had a proper relationship. But how cute would they be together?

This needs to happen!

Two years ago Matty returned to Emmerdale revealing to his family he is now a man (after previously being known as Hannah).

During his time on the show, he had a brief fling with former sister-in-law Victoria. While he has been on dates, we haven’t seen him have a serious relationship.

Meanwhile Gabby has recently been struggling with being on her own and feeling like a third wheel around Jacob and Leanna. Maybe it’s time she had some romance?

I think Matty and Gabby could make a great couple… they have both been through tough times and are mature beyond their years.

3. Shirley and a new man – EastEnders

A new man for Shirley would be very interesting.

As viewers know Shirley has had a rocky love-life and even went out with Walford hardman Phil Mitchell at one point.

But let’s face it, Shirley needs a new interesting storyline and could do with a bit of love in her life.

Maybe bring in a new character? We all know that beneath Shirl’s steely exterior, she is full of compassion. Perhaps she could cross paths with a vicar, and share a common interest in helping the downtrodden of Walford – imagine her and his more well-to-do parishioners!

A new love interest for Sonia is exactly what she needs to deal with her loneliness – she’s in danger of turning into an old busy body if not.

Before the BBC soap went off air, viewers saw Sonia was struggling with feeling alone and even started to track down her father.

And, as it seems like Sonia and Martin won’t be happening again any time soon, why not get her back together with Tina?

Easties desperately needs to give Tina something to do – and the soap never fully explored this pairing.

I know this is a very far-fetched idea as the two characters are from different soaps. But we have seen soaps cross over. Back in 2010 EastEnders and Corrie crossed over for Children In Need in a special called East Street.

Bear with me… last year, Gail went to Thailand for a long time to get away from her bickering family.

Perhaps Emmerdale legend Eric happened to have taken a short break there and crossed paths with her?

And maybe loneliness spurs them on to look each other up….

Both Eric and Gail have had almost as many marriages as Henry VIII, they deserve some ever-lasting love.