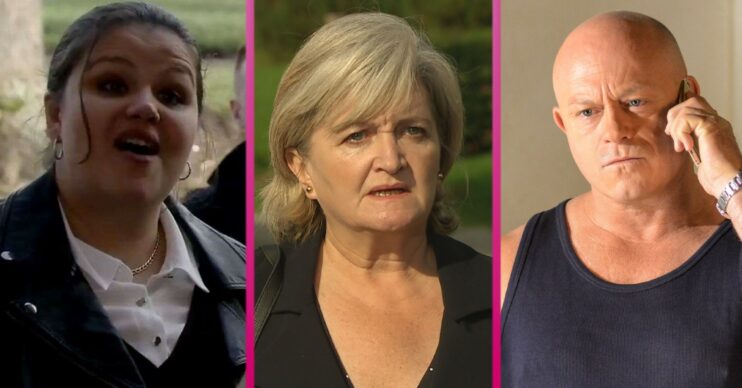 Where are all these characters when their families need them?

Soaps like Coronation Street, Emmerdale and EastEnders are meant to reflect real life but sometimes they just fail.

In the real world when shocking things happen, friends and family flock round – and return from wherever they are to offer their support.

But in Soapland once a character has left the Square/village/cobbles, it can be like they have never existed.

Here’s five examples of the worst of it…

For a woman who loomed large over Gary Windass and held him accountable for Rick Neelan’s murder – Sharon’s not half been absent.

She promised Gary she would be watching him.

But Kelly literally ended up on the streets taking drugs and Sharon was nowhere to be seen.

Sharon hasn’t even popped back since Laura revealed she’s dying.

What’s going on? Bring Sharon back!

Presuming they had them, it would make sense for at least one or two to care enough to pop down to the village, no?

If a serial killer has murdered one of your nearest and dearest and is facing trial – the very least expected is to face them down in court.

But neither Andrea nor Ben get a look in.

Her mother only turned up to get Millie, and the love of Ben’s life couldn’t get out fast enough.

She might not have been seen in Walford for years but Zsa Zsa best have a good reason for not coming back.

Because her mother was literally murdered.

Nancy had to go and see her to tell her about her mum’s death for crying out loud.

And she’s not even coming back for the funeral – and that makes absolutely no sense.

Now I don’t know about you but if my daughter was brutalised by a vile rapist, suffered a breakdown, almost killed the wrong man in revenge and went to prison, then I’d probably visit.

But not Anna Windass.

She’s far too busy working at a cafe in Cleethorpes or somewhere.

And now with Faye killing a pensioner, Anna’s still nowhere to be found. Why?

Where is Grant? The last time he was seen he’d left with daughter Courtney to rebuild the Mitchell empire.

Never mind the crumbling empire left in the less than capable hands of Kat Slater.

Phil’s in prison and needs him.

It makes no sense that Grant wouldn’t come running to help steady the family ship, so to speak.

And actor Ross Kemp would be willing to return, so it’s time for bosses to make it happen. Especially with Sam coming back.