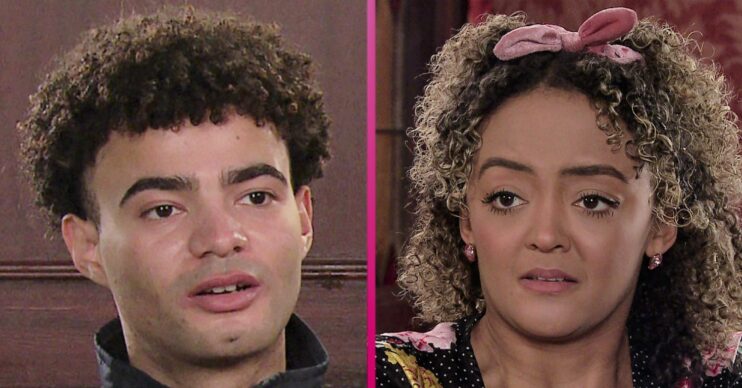 Coronation Street spoilers for next week reveal Jon drops a bombshell on Emma.

Meanwhile Craig becomes suspicious about who Emma’s been seeing.

Will he get closer to the truth?

Emma has secretly been meeting with Ted’s grandson Jon for weeks, hiding the secret from him that she and Faye played a part in his death.

Next week Faye struggles with her allergy to Peanut, so Craig asks Emma if she can take the dog out for a walk.

Emma takes Peanut out with Jon but when she bumps into Beth, Beth introduces herself to Jon leaving Emma panicking.

Craig confronts Emma and is convinced she’s secretly been meeting up with Jon.

When Craig asks her outright, Emma denies it and Craig hopes she’s telling the truth as it could jeopardise his return to the police.

Later Craig is thrilled to receive an email confirming he can return to the force.

Jon drops a bombshell on Emma

Meanwhile Jon tells Faye that Ted left him £25k in his will and he plans on using the money to fund a new life in Australia.

They agree to make the most of the time they have left together and book into a hotel.

Read more: Coronation Street: Beverley Callard hits out at soap after her exit

At breakfast the next day, Emma tells Jon she’s going to call in sick so they can spend the day together.

Later she lies to Craig and Faye that she’s spent the day with an old school friend. But will they figure out the truth?

Will you be watching Coronation Street next week? Leave us a comment on our Facebook page @EntertainmentDailyFix and let us know what you think.