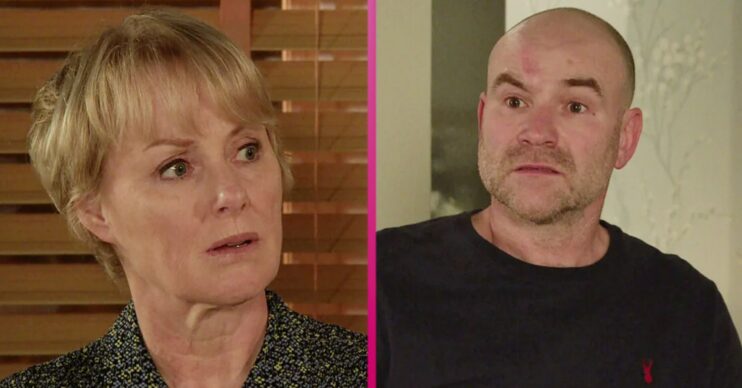 Coronation Street spoilers: Sally and Tim over for good?

Sally's had enough of Elaine!

Coronation Street spoilers for next week reveal Sally and Tim are at loggerheads over Elaine’s presence.

But when Tim fails to throw his mum out, Sally packs her bags and leaves again.

Can they resolve this or are they over for good?

Sally returned to screens on Friday, March 25 having been looking after her sister, Gina, in Newcastle.

Tim was thrilled to see his wife and even though he was supposed to be on a sex ban following his heart surgery, he cheekily persuaded her to head up to bed with him. However, Elaine spoiled their fun and put a stop to any bedroom action.

Next week Tim finally gets the all-clear to be intimate with his wife again.

The couple are totally loved up and ready to make up for lost time, but just as they get down to business, who should burst in again but Elaine!

Tim realises his mum being in the house all the time is affecting his performance. He tells Sally he’s going to throw her out, pleasing his wife who has been sick of his mother for months.

However when it comes to the crunch, Tim just can’t do it.

And to make matters worse, far from throwing Elaine out, he actually offers to redecorate the spare room for her instead!

There’s no second chances as far as Sal is concerned and she is furious.

She lays into her husband for failing to get rid of his mum.

And then she packs her bags and heads straight back to Gina’s.

Tim swears he’ll sort the situation, but Sally’s not convinced.

Will she stay at her sister’s for good?

Could this be the end of Sally and Tim all thanks to Elaine?

Or will Tim find his guts chose his wife over his mother?

Are Sally and Tim over?