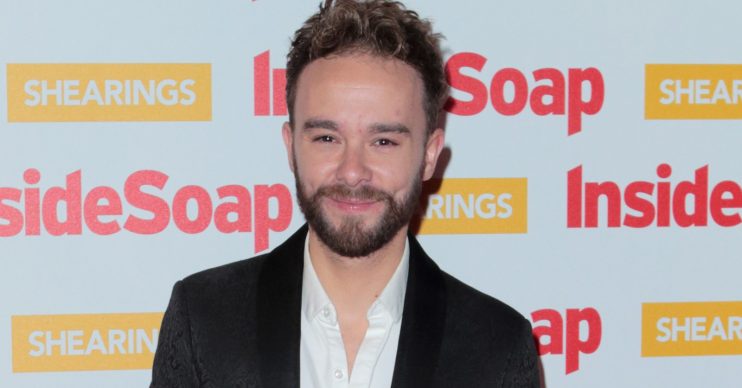 Colson Smith got a ribbing as well

Coronation Street star Jack P Shepherd has been teased by his co-stars Ben Price and Colson Smith over his lockdown look.

Since Corrie suspended filming due to the coronavirus pandemic, the David Platt actor has been in isolation like everyone else.

But it hasn’t stopped him, Ben and Colson virtually getting together to record their regular podcast the Sofa Cinema Club.

And it seems Jack has given up shaving while he’s not filming, letting his usually neat beard grow wild!

Jack shared a clip to his Instagram stories of Ben, who plays his on-screen brother Nick Tilsley, laughing his head off at both Jack and Colson’s new looks.

“You two are having a hair off,” he roared. “You’ve gone bright white, and he’s been on a desert island so long he’s gone the full on…”

Even Jack himself conceded: “It is stupid!”

“You need a pipe!” Ben quipped.

Colson poked fun at himself too. He said his hair’s gone bright white, like a “snow leopard” and he has had a “dodgy cut” from his dad.

Jack has been keeping busy in lockdown filming recreated clips from movies for his followers.

The first one he did was of Hugh Grant’s infamous dance from Love Actually, and more recently he did the dancing in his pants scene from Risky Business.

Last week, Jack said he would quit Coronation Street if they ever stop giving him good storylines.

The actor has played David Platt for 20 years in the ITV soap but that could all end if the plots dry up.

He told the Metro’s Sixty Seconds: “If something came up that was too good an opportunity to turn down, or if they stopped writing good stories for me, then I probably would.

On-screen at the moment, his wife Shona is about to return having suffered a brain injury after being shot at Christmas.

Shona can’t remember her life in Weatherfield, or her husband, and has asked for a divorce.

Desperate David is trying to deal with the hurt by seeking an adrenaline rush. He keeps going in search of gangs to mess with in order to put himself in danger.

Policeman Craig is trying to help him channel his energy into running, but David is still seeking the rush of trouble.