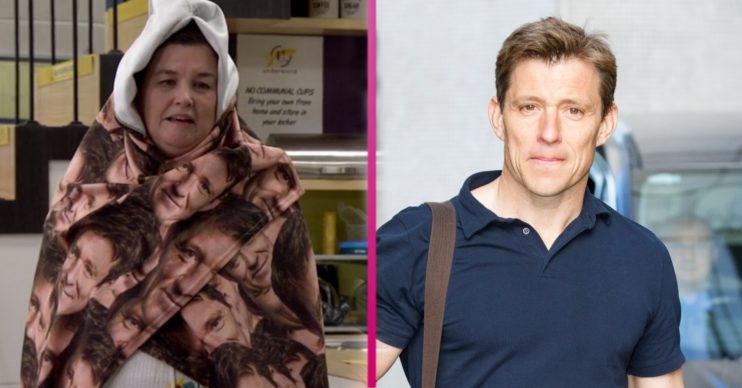 Mary has a thing for Ben!

In Friday’s episode (August 14) of the ITV soap Mary went to the factory to show her housemate Sean her latest online purchase.

She explained: “I wanted to feel what it would be like wrapped in his arms. But I think your need is much greater.”

Mary then showed Sean the blanket which had the Good Morning Britain presenters face printed all over it.

She told Sean: “I haven’t had a cuddle from a handsome man for many, many a moon. And I thought what could be more reassuring than to be wrapped in the arms of the always smiling, ever kind, extremely phwarsome Ben Shephard.”

He retweeted the clip of Mary showing off her blanket writing: “The blanket is def better than the real thing!”

Coronation Street and Ben Shephard fans alike were in stitches about the blanket.

But Ben also reacted to the clip on Good Morning Britain on August 4, before the episode aired.

He said: “Patti I’m thrilled to bits, I’m very flattered as well that someone who is as discerning as Mary would feel like I can offer some sort of solace in these times of need, such uncertainty.”

Patti responded saying: “In Mary’s world being embraced by Ben is just her idea of heaven. So she’s put two and two together and come up with 10 and I think it’s a brilliant idea.

“So she could get a chain going of Ben products, anyway the blanket is a beginning.”

What do you think of Mary’s blanket? Leave us a comment on our Facebook page @EntertainmentDailyFix and let us know what you think of this story.