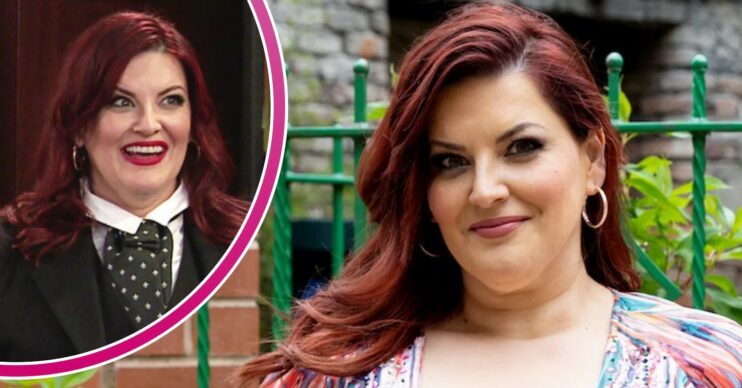 Coronation Street bosses have played a blinder by signing Jodie Prenger up.

Weatherfield’s answer to Jane McDonald arrived with a bang on Friday, August 5 and it was incredible.

Here’s why we love Jodie Prenger in Coronation Street already!

Seeing her brother George unconscious in the back of a hearse, she jumped into action fresh from her cruise ship.

Putting the mourning choirmaster’s widow at ease, she gamely talked her out of cremating him with his trombone in a scene that only Corrie could pull off.

Pointing out that molten metal wouldn’t be the best thing when it comes to spreading ashes, she ushered the widow into the undertakers for her own costume change.

Gone was her summerly cruising outfit and out came Our Glenda of the Veil.

Let’s choose to believe she goes everywhere with an emergency funeral conducting outfit.

At the wake she was the hostess with the mostess, skilfully guiding proceedings while getting Sean to pick up a mourning dentist.

3. She enjoys a drink

But as soon as it was over she was chugging back the house red like prohibition was coming in.

And when she came face to face with George’s girlfriend Eileen Grimshaw and immediately pointed out that she smelled like her nan, a legend was born.

Glenda is classic Corrie – and she could not have come at a better time.

An acid tongue, flame-red hair and enough stories of her adventures on the high seas to keep viewers entertained for years.

And Jodie Prenger is just sublime.

The actress has talked about it being her dream to join the cobbles and we are so glad she has.

5. A Corrie icon in the making

She is quite literally the best thing to happen to the soap since sliced bread, or as he’s known Richard Hillman.

And a little bird tells us that in the coming weeks she will get to show off her vocal skills with a sing song.

What more could Corrie fans want?

Would that be her behind the bar at the Rovers? Because that’s what’s happening and she’s set to be as legendary as Bet Lynch.