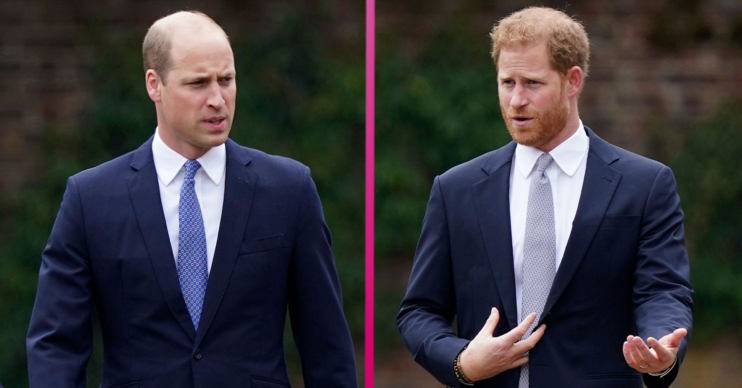 After Princes William and Harry reunited to unveil a statue of their mother, insiders have lifted the lid on what went on behind the scenes.

The Duke of Cambridge and the Duke of Sussex were reunited yesterday (July 1) on what would have been Princess Diana‘s 60th birthday.

They unveiled a statue in her honour at Kensington Palace’s Sunken Garden.

And, according to those present, it was a “very moving and dignified” affair.

However, while the pair looked jovial in front of the cameras, things appear to have been a little strained behind the scenes.

What happened with William and Harry at the unveiling?

It’s claimed that William and Harry had little time for a heart-to-heart at the unveiling.

It is understood that when Harry arrived at Kensington Palace, he wasn’t greeted by his brother.

Instead, James Holt – a former press officer at Kensington Palace who now runs the press team at the Archewell Foundation – was on hand to greet him.

The brothers then chatted for 10 minutes, it is claimed.

What happened after the ceremony?

After the ceremony, it’s reported that champagne was served on the terrace of the Kensington Palace Pavilion.

It’s claimed that Harry stayed for one polite drink and left after just 20 minutes at around 3pm.

Every day, we wish she were still with us. Our hope is that this statue will be seen forever as a symbol of her life and her legacy.

However, although their reunion was brief, it appears as if things are healing for the brothers.

The royals released a joint statement about the unveiling and seemed united in both their grief for their mother and their determination to honour her.

What did the joint statement from William and Harry say?

The statement read: “Today, on what would have been our mother’s 60th birthday, we remember her love, strength and character – qualities that made her a force for good around the world, changing countless lives for the better.

“Every day, we wish she were still with us. Our hope is that this statue will be seen forever as a symbol of her life and her legacy.

“Thank you to Ian Rank-Broadley, Pip Morrison and their teams for their outstanding work. To the friends and donors who helped make this happen. And to all those around the world who keep our mother’s memory alive.”