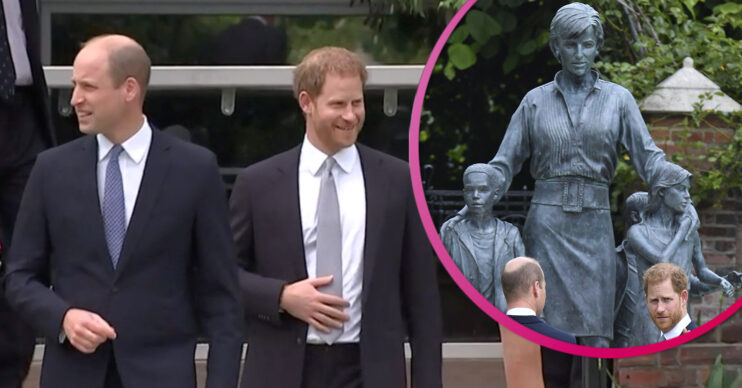 The statue has been put up at in the Sunken Garden at Kensington Palace to mark what would have been the Princess of Wales’ 60th birthday.

This afternoon, Harry and William came together for the ceremony for the first time since Prince Philip’s funeral in April.

Read more: The Princess Diana statue is MUCH better than some of these celebrity efforts

A statement from the brothers read: “Today, on what would have been our Mother’s 60th birthday, we remember her love, strength and character…

“…qualities that made her a force for good around the world, changing countless lives for the better.

“Every day, we wish she were still with us, and our hope is that this statue will be seen forever as a symbol of her life and legacy.”

They added: “Thank you to Ian Rank-Broadley, Pip Morrison and their teams for their outstanding work, to the friends and donors who helped make this happen…

“…and to all those around the world who keep our mother’s memory alive.”

Who designed the Diana statue?

It’s in the Sunken Garden at Kensington Palace, one of Diana’s favourite spots.

Underneath statue, a paving stone is engraved with: “These are the units to measure the worth Of this woman as a woman regardless of birth. Not what was her station? But had she a heart? How did she play her God-given part?”

Last week, Harry arrived in the UK from California to attend the statue unveiling.

He isolated at Frogmore Cottage before the event.

On Wednesday, the Duke of Sussex made a surprise appearance at a WellChild Awards party at Kew Gardens.

He spoke about now being a father of two, and gave an update on his newborn daughter Lilibet Diana.

He told a guest: “We’ve been lucky so far, she’s very chilled and seems happy to just sit there while Archie is running around like crazy.”

Meanwhile, Harry and William’s relationship is reportedly strained and experts say they may not reconcile yet.

However, reports say they exchanged texts over England’s win against Germany in the Euro 2020 earlier this week.

Read more: Prince Harry and Prince William ‘carry on Diana’s legacy through how they treat others,’ says royal photographer

An insider told the Daily Mail: “It is still far from good between them.

“But there has apparently been an exchange of messages, particularly about the football, which is a step in the right direction, if only to do honour to their mother.”