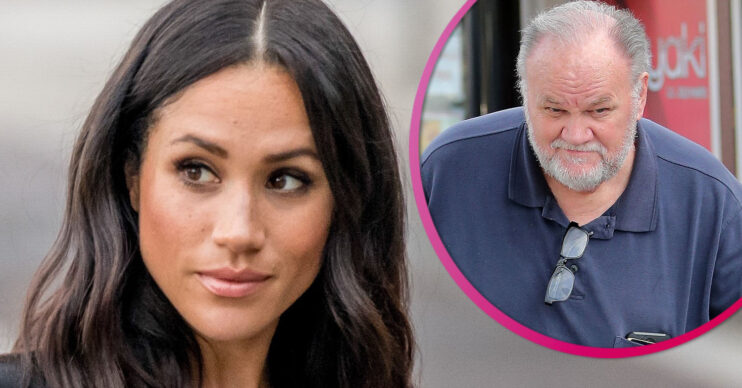 Thomas Markle latest: Meghan fans defend her as dad accuses her of ‘lying for years’

In latest Thomas Markle news, the father of Meghan Markle has once again hit out at his daughter.

Thomas hasn’t had a relationship with the Duchess of Sussex since she married Prince Harry and he hasn’t even met the Duke of Sussex or his grandchildren, Archie and Lilibet.

77-year-old Thomas is no stranger to speaking out in public about his estranged relationship with Meghan and he’s now accused her of “lying for years”.

Speaking on GB News, Thomas was asked whether he thought Meghan “lied” during hers and Harry’s Oprah Winfrey interview earlier this year.

Read more: Meghan Markle ‘ignored gift of flowers for her 40th from her dad Thomas Markle’

Thomas said: “She lied. She’s been lying for years. Lying about the archbishop? How can you say ‘we’ve been married three days before we got married’?

“Her lies are so obvious, I don’t know why she says them.”

He then added: “This is since Harry. Harry has influenced it.”

During their Oprah interview, Meghan alleged there were ‘concerns’ and ‘conversations’ within the Royal Family about how dark their son Archie’s skin would be.

Meghan also opened up about feeling suicidal during her pregnancy with son Archie, and claimed she didn’t receive help from the palace.

Thomas said: “Meghan and Harry are attacking the world. Attacking his 95-year-old grandmother is unforgivable.

“But then they spend hours on a show with Oprah.”

In conclusion, Thomas said his daughter has “changed” and was a “much more giving, loving person than she is now”.

He added: “I don’t know if he’s the one behind it, but I really think that Harry and some of her friends have changed her.

“I love my daughter, but I don’t always like what they’re doing.”

People have now taken to Twitter to share their thoughts, with many of Meghan’s fans defending her.

One person said: “Thomas Markle is such an embarrassment. As a father, you’re not ashamed to make your money by doing chatty patty about your child?”

Another wrote: “I wish Thomas Markle would just shut up. Any man willing to sell out their daughter is no father in my eyes.”

However, others hit out at Meghan and felt for Thomas.

One tweeted: “I feel so sorry for Thomas Markle. If Harry and Meghan truly believe in their own rhetoric they should bury the hatchet and build bridges. So sad.”

Another said: “I really feel for Thomas Markle. Poor guy, to go through all of this because of his spoilt daughter. So sad.”