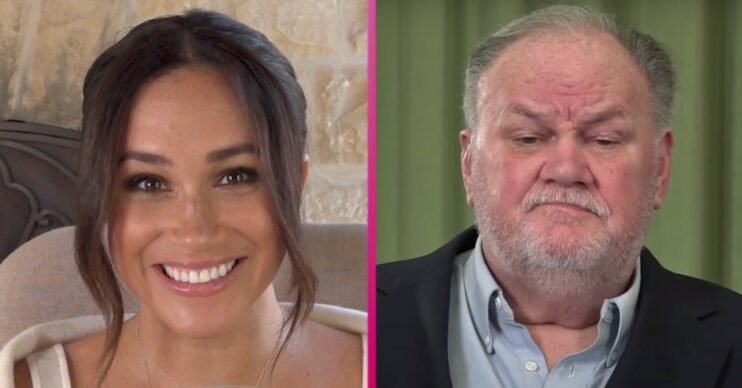 He reportedly sent estranged daughter a card with well wishes, too

In the latest Meghan Markle news, the Duchess of Sussex reportedly “ignored” a birthday gift from her father.

According to TMZ, Meghan has not responded after Thomas Markle sent her flowers.

The gossip site claims he sent his estranged daughter a bouquet of roses coming around £200 to mark her 40th.

Meghan Markle latest news: What has been claimed?

The report indicates the alleged gift “doesn’t seem to be thawing their icy relationship”.

It is claimed Thomas told TMZ he sent Meghan a dozen red roses, with two yellow roses in the middle of the bunch.

The report also claimed that Thomas deliberately referenced his grandchildren with the present.

And it continues that he “wants to be a part of their lives”.

That’s because “it seems to him the kids don’t have enough family around them in Montecito”.

Was anything else included with the flowers?

A personalised card was also attached to the flowers, the reports claimed.

Happy Birthday to my bean with much love and a brighter future. Dad.

It apparently read: “Happy Birthday to my bean with much love and a brighter future. Dad.”

How did Meghan Markle react to the reported gift?

TMZ reported: “Thomas says he didn’t hear a peep from Meghan after he sent the gift.

“But he says that’s fine and he’s just hoping she likes the flowers.”

A knockabout video message featuring Meghan and actress Melissa McCarthy was released on her birthday.

The clip began with Melissa making suggestions as to how Meghan can celebrate her milestone.

She pondered: “With my 40th lap around the sun in mind, it made me wonder: what would happen if we all committed 40 minutes to helping someone else or to mentoring someone in need?

“And then what would happen if we asked our friends to do the same?”

She continued: “It’s my 40th birthday and I’ve got an idea.

“I’m asking 40 friends to donate 40 minutes of their time to help a woman who is mobilising back into the work force.

“If we all do it, we will create some kind of ripple effect.”

A few weeks ago reports indicated Thomas has considered court action in order to see his grandchildren.

He said during an appearance on Fox News: “I’m hoping Her Majesty the Queen and the people in England will stop and think about the mistakes and bad behaviour of [Archie and Lilibet’s] parents.

“I will be petitioning the California courts for the right to see my grandchildren in the very near future.”

He also requested his granddaugher receive her christening at church with the Queen.

Thomas continued: “We shouldn’t be punishing her for Meghan and Harry’s bad behaviour. Archie and Lili are small children. They’re not pawns, not part of the game. And they’re also royals.”