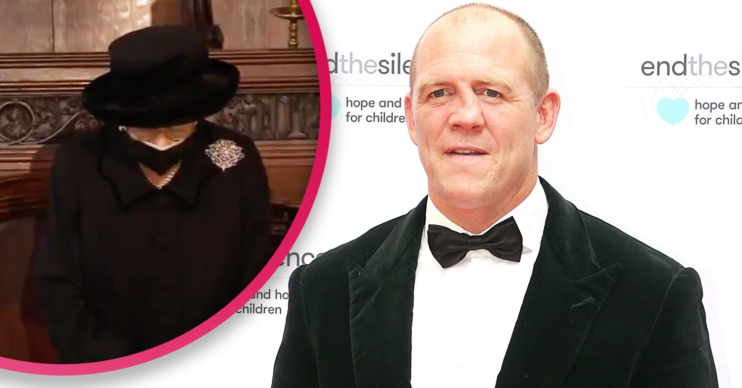 The Queen sitting alone at funeral of Prince Philip was ‘tough’ to watch, Mike Tindall admits

The Queen sitting alone at the funeral of Prince Philip was “tough” to see, Mike Tindall has admitted.

During both interviews, he paid tribute to the monarch but admitted it was difficult seeing her sitting alone at her husband’s funeral.

What did Mike say about the Queen and Prince Philip?

Speaking on BBC Breakfast, Mike admitted: “Loss is always going to be difficult.”

And, while he said he thought the funeral was “beautifully done”, one aspect of it was especially tough.

He admitted: “At the same time, we had to see the Queen make a stand in terms of showing what the world was at the moment.

“To sit on her own and be as brave as she was, I thought just summed her up as a lady. She was amazing.”

To sit on her own and be as brave as she was, I thought just summed her up as a lady.

Mike said after the funeral finished the family were told to “get in your cars and go home”.

He added: “That’s what was allowed and what the rules state.

“Yes, it was tough. But I thought the actual funeral was done so well and he would be looking down, happy about the way that it happened.”

Mike paid further tribute to Her Majesty over on ITV’s morning show with Ben Shephard and Kate Garraway.

He said: “I think that’s what she does, she leads by example.

Read more: Prince William reflects on ‘sad’ death of his grandfather during royal engagement with Kate

“I can’t really say it was amazing to see, I didn’t really want to see it. But everyone’s seen it now,” he said of the monarch sitting alone.

“Even after the funeral it was sort of, you all need to leave. So you didn’t even get to have that supportive side afterwards.”

‘She leads by example.’@miketindall13 praises the Queen as he tells Ben and @kategarraway that the way Prince Philip’s funeral was planned and run was ‘exceptional’. pic.twitter.com/rjwaad6pib

However, Mike said the funeral would’ve been just what Prince Philip would have wanted.

“I think the way that the funeral was planned and run was exceptional.

“If he was looking down, it being in the middle of a pandemic and, not being under the radar but a bit more low key, he probably would’ve been more happy with that.”

Mike added: “Even though the rest of us would’ve liked it to have been a bit more of a celebration.

“But that was the man that he was.”

Head to our Facebook page @EntertainmentDailyFix and have your say.