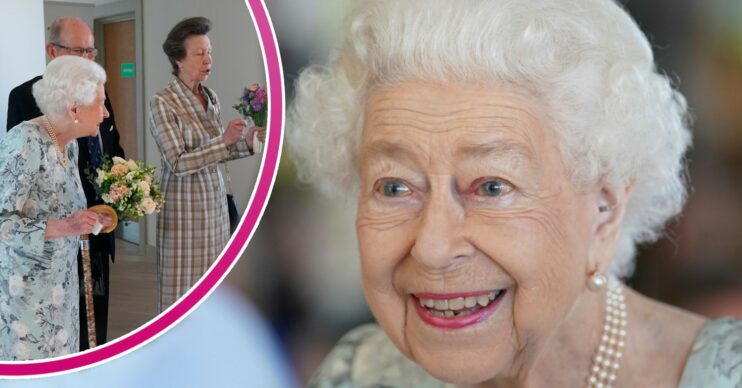 The monarch was all smiles today

The Queen made a royal appearance with Princess Anne today and fans were left all saying the same thing.

Her Majesty, 96, was all smiles alongside her daughter as they visited Thomas Hospice.

The Queen and Anne, 71, were there to officially open the new building at the hospice, which is in Maidenhead, Berkshire.

The Queen and Princess Anne today

The monarch looked very summery in a light blue floral dress and her signature black shoes and handbag.

Read more: ‘Reason’ Camilla, Duchess of Cornwall will be known as Queen Consort in future

Meanwhile, Anne looked as stunning as usual as she wore a striped yellow dress.

During the visit, Anne and the Queen met and spoke with staff members.

Her Majesty also unveiled a plaque at the hospice.

As photos emerged of the Queen attending the engagement today with Anne, many royal fans were delighted.

They took to Twitter to gush over the monarch’s appearance and said she looked “lovely” and “marvellous”.

One person wrote: “How awesome it is to see Her Majesty looking so well!!

“And she’s walking quite confidently, not hesitant at all!! God Save the Queen!!”

Another said: “Her Majesty has arrived with the Princess Royal to open the Thames Hospice buildings. Doesn’t she look marvellous!”

A third tweeted: “How wonderful it is to see Her Majesty being able to be out and about!! And she looks so awesome!!”

The Queen used a walking stick during the visit.

She’s been having some mobility issues over the last few months, the palace previously said.

During her Platinum Jubilee celebrations at the start of June, the monarch was only able to make a few appearances including a balcony appearance during Trooping the Colour.

However, last month, reports claimed the Queen had been back riding her horse.

A source told The Sun: “The Queen has enjoyed being on her horse again.

“Riding again is a wonderful sign after all those worries we had about her health. To be able to do so at 96 is pretty remarkable.”