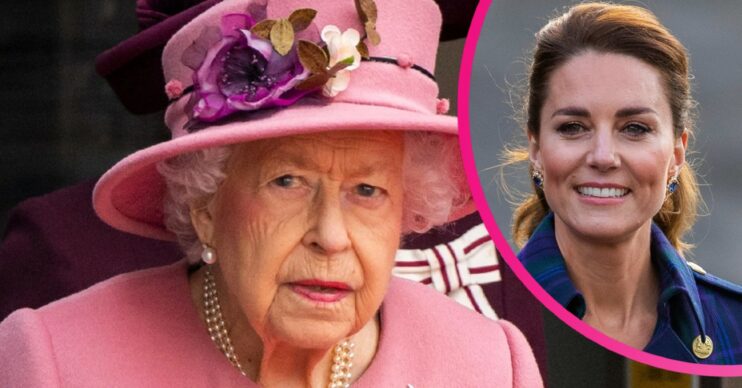 The anniversary marks her first without Prince Philip

In latest royal news, Kate Middleton may support the Queen as her first wedding anniversary without Prince Philip approaches.

Her Majesty lost her beloved husband, the Duke of Edinburgh, back in April.

Ahead of their anniversary on November 20, a royal expert has predicated that the Queen may return to Sandringham to feel closer to her husband.

According to royal commentator Duncan Larcombe, Sandringham was known for being Philip’s “favourite residence”.

He explained: “Sandringham was Philip’s favourite residence by some distance and he would have liked to have lived there all the time if he could have.

“You can imagine that the Queen takes comfort from being there.”

Read more: The Queen shares message about ‘passage of time’ before wedding anniversary

However, the Queen won’t be alone.

In addition, Duncan claims that the monarch may be joined by Kate.

Kate and husband Prince William own their own country home, Anmer Hall, close to Sandringham.

Duncan told OK!: “I think Kate will be considered the right person to offer support to the Queen on what will be a poignant reminder of a long and happy marriage. Being at Sandringham makes it very easy for them to make private visits to see the Queen. ”

Their upcoming anniversary marks her first without Philip.

The pair were together for 73 years before his death.

Over the weekend, her Majesty missed Remembrance Sunday due a sprained back.

As a result, other senior royals attended the service.

An expert recently said the Queen is starting to transition responsibility to other royals.

Appearing on BBC Breakfast this week, Jennie Bond said: “I think what we’re seeing now is a gradual transition of responsibility from the Queen to Prince Charles, Prince William, and other senior members of the Royal Family.

Read more: Prince Charles ‘flies out of UK after getting Queen’s permission during phone call’

“They are taking on more responsibilities.”

She added that the senior royals will probably be at the “forefront” of the Queen’s Platinum Jubilee next year.