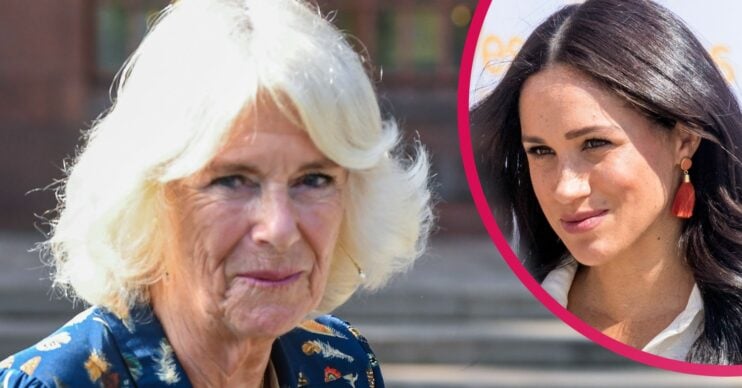 Camilla’s gesture to Meghan Markle was a ‘sign she was accepted by family,’ claims royal author

Camilla’s gesture to Meghan Markle showed she was accepted by the Royal Family, an expert has claimed in latest news.

In an updated biography, Meghan: A Hollywood Princess, author Andrew Morton says the Duchess of Cornwall held Meghan‘s hand during one of her first royal engagements.

Mr Morton claims that this was “genuine affection” from Camilla and “was a sign of how quickly the American actor had been accepted and treated”.

Mr Morton writes in the book: “On 22 May 2018, when the Duchess of Cornwall, the future queen consort, held the hand of the new Duchess of Sussex during a garden party to celebrate Prince Charles’s seventieth birthday at Buckingham Palace…

“…this rare royal gesture was a sign of how quickly the American actor had been accepted and treated with genuine affection by the Royal Family.

“On that day, Camilla, Duchess of Cornwall, was, without saying a word, signalling to the watching world that Meghan was now ‘one of us’.”

Meghan and Prince Harry have since stepped back from their senior royal roles.

They made the decision last year and now live in the United States with their son Archie and daughter Lilibet.

The couple have since done interviews and made a series of claims about the Royal Family.

Speaking in their infamous Oprah interview in March this year, Harry claimed he became cut off financially by his family “in the first quarter of 2020”.

Meanwhile, Meghan alleged there were ‘concerns’ and ‘conversations’ within the family about how dark their son Archie’s skin would be.

Reports suggested a rift between Harry and his family had now deepened because of his comments.

However, royal experts are predicting Harry and Meghan may return to the UK for Christmas.

And this could “pave the way for a healing of the family rift”.

Katie Nicholl told Closer magazine: “Christmas is being looked at as an opportunity. There may be a softening, which could pave the way for a healing of the family rift.

“It’s certainly what the Queen wants.”

What do you think of this story? You can share your thoughts on our Facebook page @EntertainmentDailyFix.