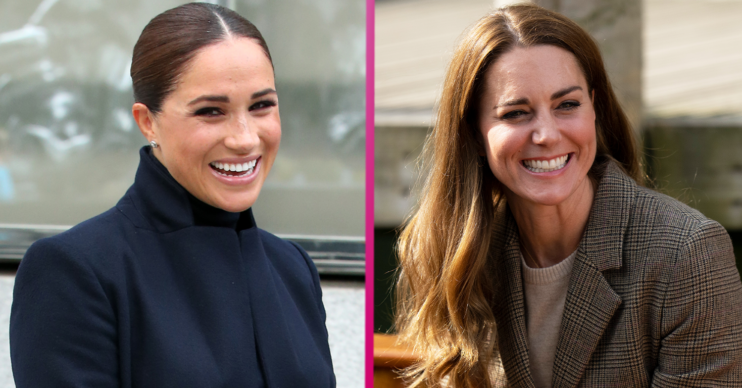 The duchesses have a lot in common

Kate Middleton and sister-in-law Meghan Markle would’ve most likely been the best of friends in another lifetime.

The women – both married into the royal family – have a lot of striking similarities.

Here, we take an in-depth look at the things they share in common, despite the distance – both physical and metaphorical – between them.

Many things link the ladies – not just the fact that they both married into the British royal family.

Both Kate and Meghan came from modest backgrounds and working-class families, meaning they were both commoners who married into the royal family.

Much like Princess Diana, both never quite expected the amount their lives would change after marrying Princes William and Harry.

And, as Kate went before Meghan, it’s thought she helped her with the transition from her life as an actress to that of a royal.

Kate and Meghan: Motherhood links them

Both women are mothers – and both had boys first.

Of course Kate is mum to George, Charlotte and Louis, while Meghan has Archie and Lilibet.

However, just because they’re not swapping parenting tips and exchanging hand-me-down clothes doesn’t mean the ladies don’t have a similar parenting style.

Much like Diana, they grew up out of the limelight, and it’s thought their normal upbringing has shaped the mothers they’ve become.

On public occasions, both women are very much hands-on mums, with Meghan doting on Archie during their royal tour of South Africa and Kate chasing after Prince George at the polo.

Kate and Meghan are both dedicated followers of fashion – although admittedly Kate is more conservative than her sister-in-law.

When the Duchess of Cambridge joined the royal family she brought with her an army of dedicated fashion followers and the phrase “the Kate effect” was coined.

Everything she wore turned to gold, selling out immediately – and the same happened when Meghan joined The Firm.

Kate Middleton and Meghan Markle: Both love sport and fitness

Meghan and Kate share a love of tennis and have been to Wimbledon together.

Kate is patron of the All England Lawn Tennis & Croquet Club, while Meghan is besties with tennis ace Serena Williams.

Meghan is also a yoga lover and runner, while Kate takes regular power walks and loves rowing, pilates and swimming.

Kate Middleton and Meghan share a love of the great outdoors

The ladies are both nature lovers and keen gardeners.

When they lived at Frogmore Cottage, Meghan and Harry reportedly planted a herb garden and vegetable patch.

Meanwhile, over in California they have their own chicken coop.

Kate, meanwhile, designed her own garden at the Chelsea Flower Show.

The women are both well educated, so they also have that in common.

Charity begins with Meghan and Kate

Even before she joined the royal family, Meghan was a humanitarian.

She supported the UN and visited a refugee camp in Rwanda, she also worked with World Vision and the One Young World charity.

When she joined the royal family she was also inducted into the Royal Foundation – a charity Kate, Will and Harry founded.

After leaving and going her separate ways, Meghan now undertakes lots of charity work with Harry in the States.

There she helped with environment programs and a community project for disadvantaged children.

Meghan has previously said: “I’ve never wanted to be a lady who lunches – I’ve always wanted to be a woman who works. And this type of work is what feeds my soul, and fuels my purpose.”

Kate and Carole Middleton are super close, as are Meghan and her mum Doria Ragland.

The duchesses’ mothers also have a past work history that links them.

Carol was British Airways cabin crew – and it was at work that she met fellow crew member and now-husband Michael.

Meghan once said: “My mom was a travel agent, so off-the-beaten-path travel has always been a big part of my life.”