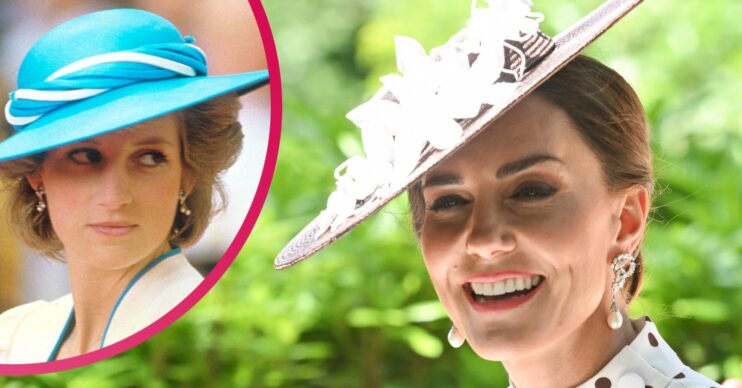 Did you spot the similarities?

The Duchess of Cambridge, 40, wore a £1,970 Alessandra Rich polka dot dress for the occasion.

She joined her husband Prince William for the carriage procession at the Berkshire racecourse.

It was the couple’s first time in attendance at the racing meet since 2019.

But Kate‘s fashion choices seemed to be a throwback to the 1980s, giving a nod to an outfit worn by her late mother in law.

And she also wore Princess Diana’s diamond and pearl earrings.

But observers reckon they have spied subtle tribute from Kate with her look.

And that’s because Diana reportedly wore a frock at the same event in 1988 that appears very similar to Kate’s.

Furthermore, it is thought Diana appeared in the same outfit at a previous race meeting, at Epsom in 1986.

Royal enthusiasts on social media also made the connection between what Kate wore and Diana.

One person gushed over one picture: “So chic, I love Kate’s earrings! If I’m not mistaken, they belonged to Princess Diana. I love them.”

In conversation with someone else, one poster insisted Kate is not ‘copying’ Diana’s look.

“People forget that Diana was a fashion icon!” they asserted.

Kate has all Diana’s style and allure.

“Her style is still going strong today, especially with the upmarket designers.”

Someone else compared the two women: “Kate has all Diana’s style and allure.”

While someone else claimed: “I believe Diana would be so in love with Kate.”

And another person claimed Kate has eclipsed the late Princess of Wales when it comes to fashion.

“She may have been inspired by Diana but Kate took it to the next level. So perfectly elegant. #DuchessofCambridge,” they tweeted.