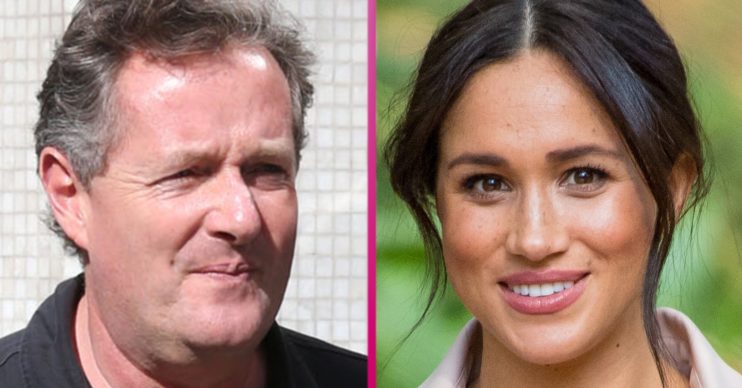 GMB: Piers Morgan hits back at Meghan Markle over claims of being ‘most trolled person in the world’

This time the GMB star, 55, said that what Meghan, 39, said about being trolled, simply isn’t true.

Piers poked fun at Meghan saying she was the most trolled person in the world in 2019.

The former Suits actress made the claim during a podcast about mental health for teenagers.

Speaking on the Teenage Therapy podcast, the Duchess said: “In 2019, I was the most trolled person in the entire world – male or female.

What has Piers Morgan said about Meghan Markle?

“[For] eight months of that, I wasn’t even visible, I was on maternity leave with the baby – but what was able to be manufactured and churned out, it’s almost unsurvivable, it’s so big you can’t even think what that feels like.”

Read more: Why Meghan and Harry could spend New Year’s in the UK

But Piers clarified on his ITV show that at least in the UK Adele was the most trolled celebrity last year.

After that it was Gemma Collins. Meghan apparently came in at number three.

Piers said: “Adele was first as she lost weight and all the people who loved her for being fat trolled her!

What did Meghan say about trolling?

“If you lose weight and get healthy and get trolled.

But he appeared to revel in the fact that Meghan received more trolling than both himself and President Trump last year.

He even said he gets regularly trolled by Meghan Markle fans.

Finally, he mocked Meghan for saying how much she valued Tom Bradby asking her if she was OK on her and Prince Harry’s documentary: Harry & Meghan An African Journey.

Piers said: “The tone deafness is remarkable. Are you OK in your Santa Barbara mansion?”

She referenced this in the podcast, and answered the question again. Before asking how the teens featured were as well.

Piers’ criticism for Meghan goes a few years back.

He claims that she ghosted him after they met for drinks in a London pub in 2016.

Piers explained: “She turned up looking a million dollars. We talked about life and the universe and Donald Trump and — you know, everything really.”

He says she ended the meeting by saying she’d like to seem him again.

Before adding: “Last I ever heard from her…the most brutal ghosting of all time.”