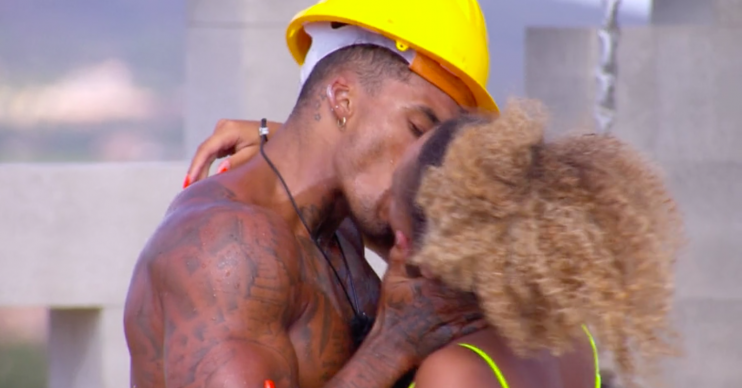 She had to watch her ex play down their relationship

Thursday night’s episode of Love Island was one of the most dramatic of the series, but there was drama happening off screen, too.

The 22-year-old recruitment consultant looked horrified as the show began, and Michael admitted he still had feelings for Amber.

Following Joanna’s exit, Michael pulled Amber to one side, telling her: “I’m basically letting you know that I do still like you.”

She was gobsmacked and pointed out the convenient timing. He denied it was that, even implying he didn’t actually mean Joanna when he’d previously declared: “I’ve found what I’m looking for.”

He added: “I’m gonna throw all my pride out the window and tell you how I feel.”

Watching from home, Joanna admitted: “Wow! Like, even my dogs are going crazy. Oh my gosh! In all honesty, for me that is hard to watch.”

She also slammed Michael for blaming her, saying: “The amount of times I’ve said, ‘Check Amber’s OK, please go over, please go and see her, check she’s OK’. He was like, ‘No, no, no’.

“Feel like it’s constantly getting pointed at me and yeah, it’s not OK.”

Later in the episode, Joanna also shared her reaction as she watched Michael and Amber share a passionate kiss during the villa’s buffest builder challenge.

Getting close to the camera, she joked: “At least Michael’s getting some action now, eh?”

She also praised Ovie and called for couple Belle and Anton to win the show.

Read more: Love Island fans have set up a petition to get Ovie to be the first singleton to win the £50k

Fans of the show were quick to react to the shocking turn of events, slamming “toxic” Michael for playing Joanna.

One tweeted: “Joanna needs to not watch love island. Just upsetting herself.”

Another said: “Poor Joanna though, she didn’t really deserve any of this #loveisland.” A third added: “lmaooooo Joanna was right when she called you a snake sir #loveisland.” One more wrote: “I honestly feel for Joanna 😭 poor gal.”

Even Love Island producers warned in a tweet: “Joanna if you’re watching, look away now.”

Joanna if you're watching, look away now. 😲 #LoveIsland pic.twitter.com/fIzxdH5Mij

A few though, want even more drama, tweeting: “Bring Joanna back in to stir the [bleep]. #loveisland.”

Read more: Gemma Collins’ fans are IN LOVE with her dancing dad

We know it must be tough to watch, but don’t stop doing the Instagram Live videos, Joanna! We love them.

Can you believe the way Michael has acted? Leave us a comment on our Facebook page @EntertainmentDailyFix and let us know what you think.