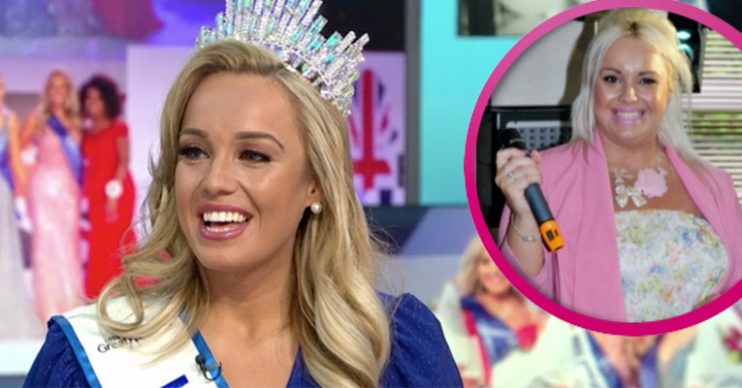 The heartbreak diet in full effect!

Just two years ago, Jen Atkin weighed in at almost 18 stone and was single, having split from her fiancé who told her she was “too fat”.

Now, with the break-up prompting her to turn her life around, Jen has lost eight stone and was last week crowned Miss Great Britain.

She told Good Morning Britain‘s Ben Shephard and Susanna Reid that she gave up junk food, learnt to cook and joined a gym – more to stop herself feeling lonely than to get fit.

Speaking about her ex, Jen said: “We both got too comfortable and I don’t think we were compatible. We’re still friends now but I’m like: ‘Thank you so much for leaving me because it’s the best thing that ever happened.'”

Chatting about her weight loss journey, Jen revealed she’s now a size 10-12 but her weight ballooned because of her love of fast food.

“I’m a girl who just loves her food – who doesn’t love the odd Jaffa Cake and burger here and there,” she said. “But it’s all about balance.”

She added: “I couldn’t cook, I lived on my own and it just went a bit too far. But I taught myself to cook, spent hours on the internet looking at how to exercise properly and went to the gym, even just to socialise so I wasn’t on my own.”

Admitting that “losing weight is so so hard”, Jen said she did go on the “heartbreak diet”.

“I think the split probably initially was the thing that sparked the feeling of right, I need to change now,” she said, adding: “But then I started to enjoy it and the difference in myself, not in how I looked, but how I felt, just made me want to keep going.”

Read more: The Duchess of Cambridge dazzles on date night out at the theatre

And she went so far that when someone spotted her potential while she was volunteering at a homeless shelter, Jen thought it was a good idea to try out for the Miss GB title.

“With Miss Great Britain it’s so important to have a great personality. I wasn’t the prettiest girl and I was probably the biggest girl there, but I was chosen because I’ve got a good personality and an inspiring story – it wasn’t anything about the way I looked,” she insisted.

Asked how she felt about competing in the much-talked-about swimsuit round, which has been axed from the Miss World competition, Jen revealed she loved it.

I’m a size 10-12, I’ve got stretch marks everywhere and I’m really proud of that.

“I found it quite empowering to be one of the biggest girls on stage in my little red swimsuit, I enjoyed it,” she said.

Catch me on Good Morning Britain on ITV this morning around 8.25am 🎥📸👑 #tv #GMB #itv #studio #missgb #begreat

“I’m a size 10-12, I’ve got stretch marks everywhere and I’m proud of that. Maybe Miss Great Britain should make the round optional, but I would go on to make a point that you don’t have to be a size 8 to wear a bikini or swimsuit,” she said.

“I’m going to go on that stage and rock it no matter what,” she added.